Ibec call for businesses to be proactive in European Parliament elections 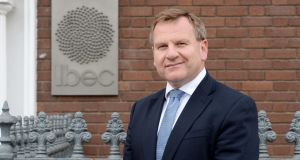 Danny McCoy: “The success of business will determine the ability of the EU to grow, improve job opportunities and living standards.” Photograph: Alan Betson

With vital economic issues from Brexit to a global trade deal on the agenda, Irish business lobby group Ibec is calling on businesses to play an active part in promoting the importance of the upcoming European parliament elections.

Danny McCoy, Ibec chief executive, said: “The success of business will determine the ability of the EU to grow, improve job opportunities and living standards, and generate the resources for public services and infrastructure investment. It is vital that the needs of business are a priority for candidates.

“The 2019 elections are taking places against the backdrop of a wave of populism sweeping across many parts of the EU. It is extremely important, therefore, that the electorate in Ireland takes seriously what is at stake on May 24th. The overriding message from Ibec is to turn out and exercise your democratic right to vote.”

At the launch the group will set out key business priorities and say that the elections are an opportunity to strengthen Ireland’s influence in the European Parliament, in its political parties and on its policy committees.

As part of its campaign, Ibec says the EU should continue to advance ambitious, balanced trade agreements with its partners.

“This should include a comprehensive and ambitious future trading relationship with the UK post-Brexit, in addition to closer trading and investment partnerships with the US and China.

“The next European Parliament must work to deliver a sustainable economic future for Europe by supporting carbon-reduction goals that are ambitious, achievable, cost-effective and do not leave business or citizens behind.”