Apartment complexes near Zhengzhou where factory workers live have closed all but one entrance, which is monitored by guards 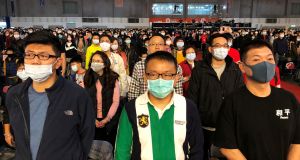 On any normal morning thousands of workers stream in and out of the huge gates of Foxconn Zhengzhou Science Park, a 1.4 million square metre compound in the central Chinese province of Henan. But on Tuesday there was only one man at the gates: a customs official standing guard.

As Chinese authorities scramble to contain an outbreak of novel coronavirus, factories have been ordered to remain shut until Monday following last week’s lunar new year holiday – this heart of the global technology supply chain has stopped beating.

The customs inspectors normally make it easy for Apple to quickly export the smartphones made here – the world’s largest iPhone factory – each day. But the official did not know when work at the plant would resume.

With its heavy reliance on production networks in China and outsourcing geared towards just-in-time shipments, the technology industry is among the hardest hit by the disruption of normal economic life.

“Since the top provinces in terms of infections include Zhejiang, Guangdong and Henan, which are so important for tech manufacturing, there obviously is a big problem,” said Don Yew, an analyst at Morningstar in Singapore. “This episode is going to make it even clearer to Apple that there is overconcentration in China and they may want to address that.”

If Foxconn is unable to restart production on Monday, Apple will have to delay the launch of its next iPhone, planned for March, by several weeks, Mr Yew added.

Foxconn declined a request for an interview about the impact of the outbreak on its business “due to time constraints”. Apple did not immediately respond to a request for comment.

Foxconn still hopes to resume operations next week but the municipal government announced on Tuesday that anyone arriving in the city from elsewhere in the province would have to self-quarantine at home for seven days. Those arriving from provinces where the epidemic is more severe would be required to isolate themselves for 14 days.

The company has already reduced its internal forecast for revenue growth from an expectation of up to 5 per cent to under 3 per cent.

The apartment complexes where the factory workers live near Zhengzhou have closed all but one entrance, which is monitored by security guards. Workers who have been to Hubei province, where the outbreak started, are not allowed out.

Others can leave and return but are not allowed to gather in groups, according to Jin Boyang, a member of the local epidemic control committee.

Foxconn has large plants in more than a dozen other Chinese provinces, and global tech companies including Apple, Huawei and Samsung have several other manufacturing partners, such as Pegatron and Wistron. Most of that capacity is located in regions that are under the same kind of restrictions as Henan.

Even if customers wanted to shift orders elsewhere, it would take several months, experts said. “This requires engineers from the customer companies spending some time on-site, but right now many pull their engineering staff out and reduce travel,” said an executive at a Taiwanese component maker.

The raft of quarantine rules and transport restrictions announced by authorities at different municipal levels, and differences in how they are implemented, have caused further confusion.

“It is unclear when work will restart and whether we can go back then,” said Li Yi, an employee of Biel Crystal, a Hong Kong-headquartered screen supplier for Apple’s iPhone.

He said management at the company’s factory in Huizhou, in Guangdong province, had told workers not to return before February 10th. “I can’t go back even then,” Mr Li said, who is stuck in his hometown of Jingzhou, one of the 15 cities in Hubei province under lockdown.

Some companies are less vulnerable in the short term. Semiconductor and liquid crystal display (LCD) panel fabrication plants, or fabs, do not stop operations during holidays because of the huge costs of halting some production equipment.

But the display industry is hugely exposed to Wuhan itself, where five display fabs are located. BOE Technology, the world’s largest LCD panel maker which accounts for 17 per cent of global supply, started ramping up its Wuhan facility only in November. The company’s plan to start mass production in January have been hit by the virus outbreak.

This could help ease a supply glut. “We will see a price increase of at least $1 to $2 this month for panels under the size of 65 inches,” said Eric Chiou, a display expert at TrendForce, a tech sector research company.

Some believe the current crisis will bring much larger changes. Wilbur Ross, the US commerce secretary, sparked controversy last week when he said the crisis could provide a boost to the American economy as companies move some operations and jobs back from China.

“This may become the straw that breaks the camel’s back,” said Nick Vyas, an expert on global supply chain management at the University of Southern California Marshall School of Business.

“Since it is China and lacks transparency, there is added uncertainty and fear. Given how we have streamlined things and reduced inventory and grown more globally intertwined, this produces end-to-end disruption.

“This outbreak will force them to factor the cost of failure into their calculation, and might well strengthen the case for more onshore or near-shore operations.” – Copyright The Financial Times Limited 2020