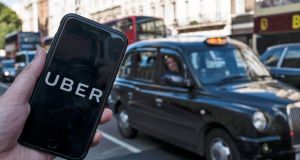 Westminster magistrates’ court in London has ruled Uber is to receive a 15-month licence for operating in London. The regulator, Transport for London, had refused the renewal of Uber’s licence in September. Photograph: Will Oliver / EPA

Uber avoided a ban in London on Tuesday after the taxi-hailing app’s new management made changes to ease strained relations with the city’s transport regulator. But its new licence will include strict conditions.

Uber overhauled its policies and personnel in Britain after Transport for London (TfL) refused to renew its licence last September for failings in its approach to reporting serious criminal offences and its background checks on drivers.

Judge Emma Arbuthnot said that, while Uber had not been fit and proper when that decision was made, an overhaul of its policies in the subsequent months had changed its position.

“[Uber] has provided evidence that it is now a fit and proper person... I grant a licence to ULL [Uber London Limited],” she said in her judgment.

The judge granted Uber a 15-month “probationary” licence to operate.

With backers including Goldman Sachs and BlackRock and valued at more than $70 billion, Uber has faced protests, bans and restrictions around the world as it challenges traditional taxi operators, angering some unions.

Uber, which has about 45,000 drivers in London, introduced several new initiatives in response to the original ruling, including 24/7 telephone support and the proactive reporting of serious incidents to police. It has also changed senior management in Britain, its biggest European market.

The ruling has been a test of Uber’s new management at board level, with chief executive Dara Khosrowshahi, who took charge the month before TfL’s original decision, pledging to “make things right” in London.

London mayor Sadiq Khan was clear that the court ruling was no carte blanche for Uber in London.

“No matter how big or powerful you are, you must play by the rules – especially when it comes to the safety of Londoners,” he said in a tweet. “Uber has been granted a 15-month licence to operate in London – but with a clear set of conditions that TfL will closely monitor and enforce.”

The licence conditions include giving TfL notice of what Uber is doing in areas that may be a cause of concern, reporting safety related complaints and having an independent assurance audit report every six months. – Reuters