Energy and innovation needs to focus on how to minimise Brexit negatives, says Lagarde 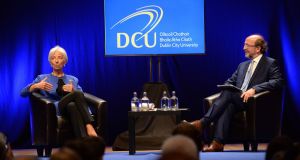 The future of the European project is at stake, and its 27 member states must look to further integrate, particularly in the euro zone, the managing director of the International Monetary Fund (IMF), Christine Lagarde, has said.

“It’s a big project that’s at risk, and the future of which is at stake,” Ms Lagarde said at an event in Dublin. “For those of us who struggle with the day-to-day complexities, the laborious process through which we integrate...it’s sometimes discouraging and frustrating, but I think we need to constantly have in mind where we’re coming from, what was the aspirations of the founders and where we can, and how we can, inspire others in the world.”

Speaking in Dublin City University (DCU), Ms Lagarde said there was a lot of work still to be done to address financial woes in the economic bloc.

She said the euro area was under external threats, noting anti-trade sentiments, the temptation for protectionism and internal member state responses often based on a nationalist approach rather than a European community approach.

Questioned by DCU president Prof Brian MacCraith on Brexit, the IMF chief said she hoped the ultimate objective was to facilitate free movement, which had benefited people both in Europe and the UK.

“What has been decided has been decided, so I’m not going to comment on that. Where the energy and the brain power and innovation needs to focus is how to minimise the negatives of this decision on both sides.”

Additional frustrations for Ms Lagarde include the increasing trade war rhetoric, something that undermines international trade and contributes to uncertainty for business.

“If you start undermining international trade by putting in place barriers, quotas, non-tariff barriers, and bringing that level of uncertainty with which companies suddenly say ‘well I’m not sure I want to invest in that particular country...because I just don’t know where this is heading’, that is particularly frustrating for those of us who have worked hard to improve the system, and hope that on climate change, on excessive inequality, on excessive debt, on productivity, on the use of technology we can make progress. So that’s why we are concerned.”

Ms Lagarde, one of the world’s most powerful individuals and a former French finance minister, again praised Ireland for its handling of the economic crisis. She said the State’s resilience, determination and ownership of the economic woes associated with the crash distinguished it from other European economies.

However, she flagged vulnerabilities in the economy in the medium to long term in the form of European tax harmonisation, which would erode our attractiveness in tax matters.

Additionally, she said public investment in housing was critical, although her conversations with Irish policymakers have led her to conclude that the issue is one that will continue to be addressed.

“Because of the measures that had to be taken, public investment will be needed in many sectors,” Ms Lagarde added, in particular flagging health and education.