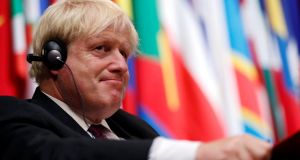 “Fuck business.” Never was the Brexit manifesto more succinctly captured than in Boris Johnson’s impromptu aside. As slogans go, it has everything. It surfs the populist wave of anger towards elites. It is easy to understand. Hell, it’s even shorter than “take back control”.

The UK’s foreign secretary apparently outlined his new business strategy at a private reception, when challenged about the clamour from Airbus and BMW over the threat to jobs and investment. Mr Johnson’s aides say the remark was aimed at business lobbyists. It makes little difference. (He has now fled to Kabul to avoid having to resign rather than vote with the government for a new runway at Heathrow. The foreign secretary had said he would lie down in front of the bulldozers. It turns out he preferred to lie low.)

“Fuck business.” It may have been a casual aside but it was also a revealingly contemptuous one, not least in its indifference to the fate of Airbus’s UK staff. This is the strategic nihilism of a spoiled child lashing out. After two years of failing to offer up even a scintilla of a plan, relying on magical thinking and the belief that if Britain just held its nerve, Europe would fold, this is all he had left - a petulant explosion.

It is only a few weeks since Mr Johnson was caught saying much the same thing about Ireland as its complexities threatened the simplicity of his Brexit. So f*** business, f*** Northern Ireland – there is no workforce too large to sacrifice, no damage too great to endure as long as someone else does the enduring.

Mr Johnson’s oratorical outrages have become so numerous that we have learnt to discount them. But he is still one of the leading lights of the Conservative party, the party of business, of free trade, of low taxation and getting the dead hand of the state out of the way of the nation’s wealth creators. For a Tory to be declaring “fuck business” should be as unlikely as Labour leader Jeremy Corbyn yelling something similar about the workers.

If this were only Mr Johnson, one might disregard it as the latest effusion from an increasingly marginalised figure. But he was articulating a broader strand of opinion. Nigel Farage’s response to Airbus was that “manufacturing is 10 per cent of the UK economy”. So, manufacturing can get lost as well. The message that you did not see on the side of the Leave campaign bus is that economic pain is a price worth paying. For all the pretence of new business opportunities, this was always their view.

Mr Farage, of course, is not a Conservative. So let us consider Jeremy Hunt, the health secretary and born-again Brexiter (a condition not entirely unrelated to considering himself a leadership contender). Challenged about Airbus’s comments, Mr Hunt said it was “completely inappropriate” for business to be voicing fears for the future of its workforce because it could undermine the prospects for a good deal. You have to wonder at some of this. Does Mr Hunt imagine that the EU was unaware of the issue? Does he envision a breathless Eurocrat reading about Airbus and thinking: “Oh wow. This could be really useful in the negotiations.”

There has always been a tension in Conservatism between nationalism and commerce. Wiser Tories kept the two strands in harmony, recognising that a wealthy nation is more likely to be a strong (and indeed, stable) one. But Brexit has brought the tension back to the fore. Mr Johnson will not let a grubby thing like business inconvenience higher ideals. This ambivalence is why, for example, Brexiters are happy to forgo the planned cut in corporation tax to fund their Brexit pledge on health.

Ranged against Mr Johnson’s new romantics are the less dashing realists such as Philip Hammond at the Treasury, Greg Clark, business secretary, and Theresa May’s deputy, David Lidington. The prime minister, herself no friend of unfettered capitalism, also sees economic chaos as a sub-optimal outcome. As one minister put it: “Whenever policy decisions come to the fore, facts trump ideology.”

For now the realists are in control, but this fissure goes beyond Brexit. One need only listen to leavers raging at the chancellor or the Bank of England to know a Tory Rubicon has been crossed.

This then is the state of British politics. A Labour party which has fallen to anti-capitalists and a Conservative party, infected by a strain of economic denialism and with a core – though not yet a majority – who place little store in business-friendly policies.

For the first time in 40 years business cannot be sure that either major party cares about its interests. The nation must hope that global businesses making investment decisions and hearing of Mr Johnson’s remark do not plump for the obvious reply.