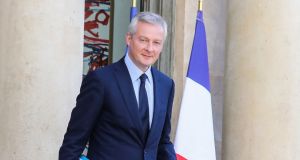 France’s finance minister has cautioned that a landmark Franco-German proposal for a eurozone budget was “non-negotiable” as he urged EU members to refrain from using the reform as a bargaining chip in the bloc’s mounting dispute over migration.

Speaking to the Financial Times days before EU leaders meet to review the Franco-German “road map” for the eurozone, Bruno Le Maire hit back at a faction of 12 member states that has sharply criticised the plans, accusing those governments of being “of bad-faith” or “contradictory”.

Mr Le Maire said the eurozone could no longer continue without reform, saying it was both financially and politically necessary.

“The status quo is impossible,” he said in an interview. “A common budget is something that is not negotiable for France.

“There is a need for something to stabilise against an economic shock...To defend the status quo is to feed populism.”

The plans agreed by French president Emmanuel Macron and German chancellor Angela Merkel in the German town of Meseberg last week include a budget to fund investment programmes in the 19-member eurozone members, as well as provide financial support to countries facing recession.

However opposition quickly emerged in Germany and elsewhere. A dozen countries, spearheaded by the Netherlands and including non-eurozone members such as Denmark, have signalled their “wide divergence” on the need for any budget, with some states concerned about giving the wrong incentives to less fiscally disciplined countries.

Separately, a deepening row over migration, sparked by Italy’s freshly elected populist government and conservative rebels in Ms Merkel’s coalition, is adding to the difficulty of building a consensus over the eurozone and has left the EU facing one of its most difficult and crucial leaders’ summits in years.

Mr Le Maire said it was “false” for opponents of the Meseberg agreement to suggest the eurozone could avoid reform if member states showed better budget discipline.

“Countries such as Ireland and Spain were not in a catastrophic budgetary situation [when the financial crisis started]. And yet, they were hit badly by the crisis,” he said. “Can we accept that a country like Spain goes through so much social and economic suffering and takes so long to recover because there is no stabilisation tool in the eurozone? My answer is categorically no. Those arguments are unacceptable.”

The 49-year-old minister acknowledged that the migration crisis posed a threat to the Franco-German eurozone plans — and that countries such as Italy, as well as Ms Merkel’s domestic political opponents, could see the Meseberg proposals as bargaining chips in talks over how to handle migrants from Africa or the Middle East.

“I am pleading for these two subjects to be kept completely separate,” Mr Le Maire said. “We have the opportunity to show we are moving forward on the economy and drawing the lessons from the financial crisis. Let’s seize on this positive agenda.”

Mr Le Maire hailed the Meseberg accord as a “political breakthrough” that remained deliberately vague to allow debate among the other eurozone members. But he also acknowledged the talks had been constrained by Ms Merkel’s political difficulties at home.

“The accord is the best we could in the current political and economic environment. It reflects the courage of both Ms Merkel and Mr Macron,” he said.

He insisted French plans did not involve fiscal “transfers” or handouts — a red line for Berlin and other northern EU countries — but only short to medium-term loans granted by the European Stability Mechanism, the bloc’s bailout fund.

Countries entering a recession would be allowed to cut their eurozone budget contributions. The ESM would cover them and be reimbursed later.

“It allows countries to continue to invest in innovation and research, which are usually the first spending lines you cut when in a downturn but are also those that allow a country to recover more quickly,” he said. “And these are loans and therefore no transfers. I know the red lines. There are no transfers but there is solidarity.”

He said the 19 eurozone members would be better off jointly investing in innovation than leading national policies of their own, “or else we will end up with Chinese or US batteries in European cars”.

Asked why this spending should be funded at eurozone rather than EU level, Mr Le Maire said that with Brexit, “more than ever, the eurozone is the future of Europe.”

“It is why we need to strengthen the eurozone,” he said. “If you do not have a stabilisation tool, you put the common currency and Europe as a whole in great danger when there is another crisis.

“We are sharing the same currency so it is legitimate to go further and to build policies that help us fund innovation and help weather downturns,” he said. “Our opponents are the first to say everybody should be allowed in the eurozone while also blocking its progress. It is not admissible.”

He said some countries including Ireland had already toned down their opposition to the proposals and that the 12 countries were “not a united group”, with varying views of a eurozone budget or the need for convergent tax policies.

“Some like Ireland and Luxembourg have expressed an interest in a budget and have reservations regarding fiscal convergence,” he noted. “That is very different from the Netherlands, which is opposed to a budget.”

Mr Le Maire said the EU’s Franco-German “motor” — agreement between Paris and Berlin – remained as important as ever at a time when US president Donald Trump sought to “weaken Europe”.

Mr Trump “gives us a reason to unite and a historic chance to become stronger,” he said. –Copyright The Financial Times Limited 2018.