Government should place ‘gender-equality goals’ at heart of budget 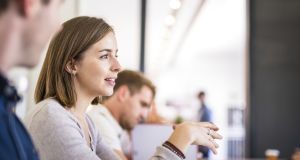 The report recommended that each government department should develop its own goals for promoting opportunities for women. Photograph: iStock

The Government should place gender-equality goals at the heart of its budgetary plans, a report by the Oireachtas Committee on Budgetary Oversight has recommended.

The committee’s gender budgeting report also said each Government department should develop its own goals for promoting opportunities for women.

The report highlighted as a template a pilot programme introduced in Budget 2018 which saw several departments set targets for boosting female representation in many activities, from filmmaking to scientific research.

Committee chairman and Fine Gael TD Colm Brophy said some 80 countries had already instituted some form of gender-specific budgeting in their fiscal planning.

“In Ireland we are taking the first important steps in addressing gender inequality at a national budgetary level across a broad range of activities and State-funded supports,” he said.

“Effective policy will need to be built on a solid grasp of often hard-to-gather data. We still have much work to do in building this essential bedrock of knowledge,” he said.

“Evidence provided to the committee from other countries shows us that we must correctly distinguish whether inequality in any given situation stems principally from gender or from other factors, including disability, age, ethnic background or family status,” Mr Brophy said.

The committee’s report was informed by a series of meetings with the National Women’s Council of Ireland, the Irish Human Rights and Equality Commission and equality officials from other EU member states.

The report recommended that the minister for finance of the day produce an annual equality budget statement as part of his or her budget day announcements.

This plan “should set out broad and ambitious strategic gender equality goals” linked to each department’s specific targets, the report said.

Other recommendations include expanding Budget 2018’s commitment to pilot gender-balancing goals, backed by better data and more thoroughly defined goals. It also mooted the idea of enshrining the goal of gender balancing in national law.

The gender pay gap has become a major issue in western countries with disparities. EU figures show that in the Republic, women earn around 13.9 per cent less than men. The gap was bigger in other countries such as the UK, where it was nearly 20 per cent.

A recent study by the Economic and Social Research Institute (ESRI) showed meanwhile that women here are more than twice as likely as men to be earning the minimum wage.

1 Aldi to impose limits as Christmas toys go on sale
2 Fair deal? Family at odds with hospital and each other not so sure
3 First look: Is the iPhone 12 Pro the best smartphone out there?
4 ‘I hate haggling because I hate when people do it to me’
5 Monsoon landlords win challenge over creditors arrangement that cut rents
6 Irish elearning company LearnUpon closes €47.4 million investment
7 Irish house prices could buck European trend and fall this year, says S&P
8 What to consider if older person or loved one needs care at home
9 Ryanair lags rivals as Covid-19 vaccine hopes buoy markets
10 Ulster Bank to meet Paschal Donohoe to discuss bank’s future
Real news has value SUBSCRIBE