Asos bans mohair, the rise of the shoffice and Angela Cleverhands 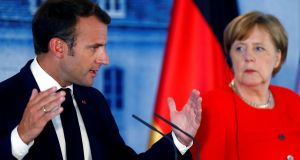 Percentage of employees who say they have found an advertisement for a job they subsequently got to be misleading, according to a survey by recruitment firm Hays Ireland.

Percentage of employees who said they wanted to meet their direct managers during the hiring process. Only 11 per cent of employers facilitated this, Hays found.

Percentage of applicants for jobs who say they have had a negative experience during the interview stage. The main reason cited was lack of preparedness on the part of interviewers, who Hays said really need to do their homework too.

Image of the week: Merkel side-eye

Angela Merkel’s coalition is in wobbly territory at the moment, which is a shame for all kinds of reasons, one of which is that her contribution to the picture news wires would be sorely missed. Here she is stealing the show from French president Emmanuel Macron at a press conference about the euro zone budget despite a) not being in focus and b) his expressive hands. You want expressive hands? Merkel is the best at them, from her “what is this fool up to now?” gesture to her “don’t talk to me” one, to her cheery “I’m actually in charge here” joined-hands pose, reserved for group photos of world leaders. The German chancellor clearly knows the power of a strong image – the says-it-all G7 summit photo featuring a recalcitrant Trump went viral after it was shared by her people. Next week: Merkel’s special “big arms” move.

If you have a “shoffice”, then congratulations, you’re one of the lucky ones, as not only do you have an office to yourself, avoiding the privacy-free, open-plan, noise-polluted, air-deprived, strip-lit hot-desk world of a regular office, but you also have a decently sized garden. A shoffice is a portmanteau for “shed” and “office” that’s been around for a while now, but both the term and the phenomenon – super-sheds kitted out with power points and wifi, not usually requiring planning permission – are gaining traction, as more people work from home but still want to have somewhere to physically go in the morning. If you do it properly, it’s a work-life separator that helps you be productive. If you don’t, it’s a weird, self-imposed garden purgatory. Still, not exactly a long commute back to the living room.

Getting to know: John Flannery

John Flannery is the chief executive of General Electric (GE), the 126-year-old company that had for some time been the last original member of the Dow Jones Industrial Average. But it has now been booted out from the index, replaced by Walgreens Boots Alliance, after a series of lacklustre earnings and questionable business decisions saw it dubbed “the dog of the Dow”. GE insider Flannery got the top job last summer after a six-year succession planning process at the company, but it hasn’t proven the best of advertisements for the merits of succession planning. Investors have been less than impressed by his vision to date for the Boston-headquartered conglomerate, which is involved in aviation, healthcare, power and renewable energy – having flicked the switch on its light bulb division last year. Some are predicting that being dumped out of the Dow Jones Industrial Average is the precursor to a Flannery-led break-up of this behemoth of corporate history that once changed lives.

Cruelty officially went out of fashion this week when online retailer Asos announced it was banning the sale of products containing certain unethical materials as part of an animal welfare push. Alongside previously banned fur and angora (from rabbits), don’t expect to find the following on its website in future.

1. Mohair: Not only is it itchy beyond tolerance, mohair comes from angora goats, the farming of which in South Africa has been found to involve “rampant abuse”.

5. Bones and teeth: A ban that raises more questions than answers.