Dublin most expensive place for expats to live in euro zone 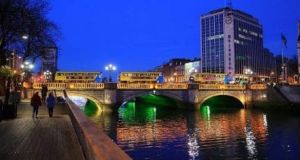 Out of 209 cities included in Mercer’s annual cost of living survey, Dublin was ranked as the 32nd most expensive. Photograph: Getty

Dublin has been ranked the most expensive place for expatriate workers to live across the euro zone – leapfrogging Paris among others.

Overall, Hong Kong, followed by Tokyo and Switzerland make up the top three most costly cities in which to stay. Asian cities dominate the top 10, accounting for six spots. They include Singapore (4), Seoul (5), Shanghai (7) and Beijing (9).

The world’s least expensive cities for expatriates are Tashkent in Uzbekistan (209), Tunis (208), and Kyrgyzstan capital, Bishkek (207).

Noel O’Connor, senior consultant at Mercer, attributes some of Dublin’s rise to the strength in the euro, but not all.

“Whilst all cities in the euro zone have risen in the rankings due to the euro strength against the dollar, Dublin has now overtaken Paris to become the most expensive city in the euro zone, in terms of cost of living for expatriate workers,” he said.

It is soaring rents that have placed Dublin at the head of the euro zone table.

“The survey identifies cost pressures on expatriate rental accommodation in Dublin as the key driver and this in turn reflects the growth of the economy, with continuing high levels of foreign direct investment,” he said.

Mercer surveys includes more than 375 cities worldwide for its annual publication. This year’s ranking includes 209 cities across five continents and measures the comparative cost of more than 200 items in each location, including housing, transportation, food, clothing, household goods, and entertainment.

New York City is used as the base city for all comparisons, and currency movements are measured against the US dollar.

Among the regions to slip this year is Australia. Brisbane (84) and Perth (61) dropped 13 and 11 spots respectively, while Sydney (29), Australia’s most expensive ranked city for expatriates, experienced a relatively moderate drop of five places. Melbourne fell 12 spots to rank 58th.

“Cities in other countries moved up in the ranking, causing Australian cities to drop,” said Yvonne Traber, global mobility product solutions leader at Mercer. “In general, cities that fall in the middle of the ranking are at greater risk of experiencing significant changes in their positions due to the movement of other cities.”

Canadian cities also dropped in the rankings, although the country’s highest-ranked city, Toronto (109), jumped 10 places due to an increase in expatriate rental accommodation costs. Vancouver (109) dropped two spots, while Montreal (147) and Calgary (154) fell 18 and 11 spots, respectively.