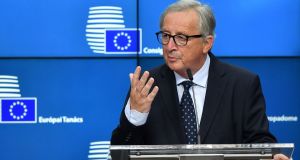 President of the European Commission Jean-Claude Juncker is to travel to Washington this month for a meeting with US president Donald Trump. Photograph: Ben Stansall/Getty Images

US president Donald Trump’s threat to hit car imports with punitive tariffs risks sparking global retaliation against as much as $300 billion of US products, Brussels has warned.

The warning is the first time that the European Commission, in a written submission to the US Department of Commerce seen by the Financial Times, has set out a detailed response to Mr Trump’s threat to slam punitive tariffs on imported vehicles, with EU capitals increasingly convinced that the unpredictable US president will act soon.

Mr Trump on Sunday said that the EU was “as bad” as China when it came to the way European countries traded with the US. In an interview with Fox News he dismissed suggestions that his attacks on the EU were counterproductive and that he should instead strengthen relations with European countries to tackle the Chinese trade issue together.

“The European Union is possibly as bad as China, just smaller . . . It is terrible what they do to us,” Mr Trump said, citing “the car situation”.

Brussels said that an American investigation into whether foreign cars and parts posed a national security risk could plunge the global economy into a full-on trade war, harming employment in the US car sector, which accounts for more than four million jobs.

In a sign of the EU’s exasperation at Mr Trump’s confrontational trade policy, which has already stoked tensions over steel and aluminium, the document said the move “could result in yet another disregard of international law” by the US. It said imposing the car tariffs would not be accepted by the international community and would “damage further the reputation” of the US.

Mr Trump said in a tweet last month that European car manufacturers faced punitive duties if barriers to US exports were “not soon broken down”.

General Motors was on Friday the latest carmaker to warn against Mr Trump’s threatened car tariffs, saying it would raise the prices of its vehicles by thousands of dollars, undermine its competitiveness and lead to US job losses.

BMW, the German carmaker that exports 70 per cent of vehicles from its largest plant in South Carolina, also warned that it could cut investment and jobs if the tariffs are imposed.

This week global carmakers warned that imposing the tariffs on car imports would raise prices of imported vehicles by up to $6,000 per car and lift prices of locally made cars.

EU officials stressed that no decision had yet been made on how to retaliate. But the document warned that the EU and other major economies would be “likely” to apply countermeasures to “a significant volume of trade”, with as much as $294 billion –- accounting for 19 per cent of US goods exports in 2017 – potentially in the line of fire. The measures could apply “across sectors of the US economy”, the document said.

The $300 billion figure identified by the EU is roughly equivalent to the value of US imports of cars and parts, which last year hit $330 billion. It would drop were the EU, or others, to only retaliate against part of the US tariffs, an approach that Brussels used last month to respond to US duties on the metals sector with tariffs imposed on products including Harley-Davidson motorcycles. EU trade officials have said that various options are being explored.

The US commerce department announced in May that it was starting a so-called “Section 232” investigation into passenger vehicles and parts to see whether imports were eroding US industry to the point where they threatened the country’s “internal economy”, including the development of “cutting-edge technologies” and the preservation of a skilled workforce.

Officials indicated at the time that the US was considering introducing 25 per cent tariffs, although Mr Trump’s tweet mentioned 20 per cent.

This week global carmakers warned that imposing the tariffs on car imports would raise prices of imported vehicles by up to $6,000 per car and lift prices of locally made cars.

The commission document said that, according to its “internal analysis” and other expert studies, the tariffs would be an “own goal” for the US economy even before other economies retaliated. The interconnectedness of the car industry, and its high degree of regional specialisation, mean that imposing additional 25 per cent tariffs on imports would cause a hit to US gross domestic product “in the order of” $13 billion–$14billion, according to the document.

The paper, submitted by the EU’s representation in Washington, also underlines that EU-owned car companies account for more than a quarter of US car production, with plants “across the country, including in South Carolina, Alabama, Mississippi and Tennessee” – all strongly Republican states – and that the majority of this production was for export.

“As markets would become fragmented, US costs would rise, US automobile exports would suffer, US consumers would pay higher prices, and jobs would be lost,” the document said.

The EU has also firmly rejected Mr Trump’s use of national security arguments to justify restrictive trade measures, saying it has no basis in fact and risks undercutting the entire rules-based system of international trade.

“This development harms trade, growth and jobs in the US and abroad, weakens the bonds with friends and allies, and shifts the attention away from the shared strategic challenges that genuinely threaten the market-based western economic model,” the document said.

The document, submitted to US authorities on Friday, marks the latest step in the EU’s campaign to get Mr Trump to step back from the brink before it is too late.

Jean-Claude Juncker, the EU commission president, is set to travel to Washington this month for a meeting with Mr Trump, and EU officials will take part in a public hearing organised by the Department of Commerce on July 19th.

EU leaders at a summit in Brussels last week warned that the EU would respond to all US actions “of a clear protectionist agenda”.

The White House did not respond to a request for comment.