Chris Johns: Maybe the Brexit equations could be solved with the addition of some dark matter? 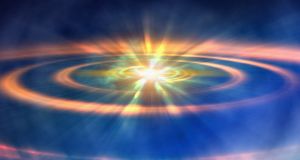 The equations of Brexit could be solved with the addition of some dark matter. One possibility involves Brussels reneging on its Irish Border commitments. That’s something the Brexiteers are hoping will soon pop into existence

Just before his death, Stephen Hawking apparently repudiated some of his views about time. He used to think that time didn’t have either a beginning or an end. Now, instead of something that has always been around, time could have started with the Big Bang. Time is weird.

In the equations it sometimes doesn’t exist at all and occasionally runs backwards. Some physicists think that our perceptions of time are merely flawed impressions; beliefs that are sincerely held but probably bear little comparison to reality.

Our sense of time’s arrow could be bogus. This moment that we think we are living in is all there is; it’s not that yesterday didn’t happen or that tomorrow won’t come, but maybe it’s all ‘happened’, or is happening, all at once, and we merely have this perception of time that helps us make sense of it all.

Substitute ‘Brexit’ for ‘time’ in that preceding paragraph and see if it makes any more sense. I am comforted by the words of another great physicist, Richard Feynman, who once said that nobody understands quantum mechanics.

Brexit and time are now linked in ways that even Nobel Prize winners may find hard to disentangle. With less than 11 months to go, the fundamental equations of Brexit don’t add up.

There are red lines that may or may not run through borders. May deploys time like a weapon, one that sees everything shoved far into the future. The British cabinet delays choosing between two types of customs arrangement.

Each of those two possibilities was long ago rejected by Brussels: one is unworkable the other does not exist. That’s reminiscent of quantum particles: what they are depends on when they are looked at and who is doing the looking.

Brexiteers are preoccupied with time: they are keen to take Britain back to the halcyon days of pre-EEC membership. Those of us who remember those times are puzzled: London was a dump and the UK economy had been in brutal relative decline for decades. Both of those things stopped after 1973.

Maybe Brexiteers think they have invented time travel that takes us to a parallel universe where Brexit makes sense. Whatever about time travel, they may find the ordinary kind tricky after Brexit: Britain looks like being kicked out of Europe’s Galileo project that will replace GPS navigation systems. So no modern sat-nav: they might be grateful for that when mobile phone roaming charges are restored for UK customers.

When equations don’t add up something will come along to make sure that they do. While we might not know whether particles are waves or solid objects, if we keep keep banging enough of them into each other for long enough there will, eventually, be a very big explosion.

The UK’s post Brexit customs arrangement are like fundamental particles. They remain mysteries to observers but, according to Brexiteers, will pop into existence, fully formed and well behaved, if we shut our eyes and stop looking for them.

Or perhaps it’s more like Schrödinger’s cat: we could only know if his boxed pet was alive or dead if we opened the lid. Until that moment, the equations said that the cat was neither alive nor dead, just existing in a state of quantum uncertainty. The parallels with Brexit are too obvious.

Peter Higgs predicted the existence of a particular eponymous particle, one that when it was discovered decades later won him a Nobel prize. The UK’s future customs framework has become the Brexit Boson: fame and fortune await those who find it. But, unlike Higg’s original ideas, there isn’t any substance to Brexit’s Boson. We go round and round equations that contradict each other.

The only way the Brexit equations can be solved is to repudiate last December’s deal on the border or for the UK, or the North, to remain in the customs union and, to all intents and purposes, the single market. Or crash out with no deal.

That’s it, that’s the maths. Each route involves a rather large bang with lots of consequences, some foreseeable, others less so.

One of the predictions of quantum mechanics is the existence of dark matter. The universe is full of stuff that we haven’t yet worked out how to detect. Scientists are confident they will one day find it.

Similarly, the equations of Brexit could be solved with the addition of some dark matter. One possibility involves Brussels reneging on its Irish Border commitments. That’s something the Brexiteers are hoping will soon pop into existence.

Throw a large chunk of time at the problem and the ultimate bang might be delayed or reduced in size. That’s why there are loud mutterings about a much more elongated transition period. Time with all its mysteries again.

Or, as the late great Douglas Adams might have said, ‘put an SEP field around anything and it will go away’. That’s ‘somebody else’s problem’. Permanent transition means forever avoiding reality. Or maybe just Provisional or Continuity Brexit?