The UK government has made Brexit promises it cannot keep 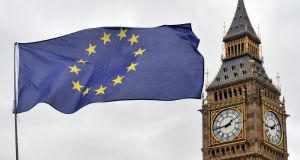 The Brexit clock is ticking and negotiation deadlines are looming. Delay and obfuscation are the clear objectives of the British negotiators

The Irish Border has its own Twitter account (@BorderIrish). The hope now must be that this is the extent of the infrastructure the British think is necessary to keep their promises about the avoidance of the restoration of a hard border. It is hard to avoid the conclusion that the whole issue has descended into farce.

The UK government has made promises it cannot keep. Leaving both the customs union and the single market legally (under WTO and a host of other rules) requires border checks. Either the North or the whole UK has to stay within the customs and single market rules. Some commentators have woken up to this: it’s not just about the customs union. The single market is in play as well. The idea that technology, even a Twitter handle for the Border, can square the circle has been shown repeatedly to be science fiction.

Does the British government know all of this? If it does the obvious accusation is one of mendacity. On the other hand, it could well be that there is a sincere hope that the EU, Ireland in particular, will blink and accept some kind of fudge. This week saw suggestions that the EU is sticking to the deal reached last December. Yes, that’s the EU reaffirming something that it said before. And, as has become boringly repetitive, Brexiteers pretend to be astonished, cry foul and mutter about European perfidy.

Without knowing what the British government either believes or wants, the only reasonable course of action is to observe what they do. While that reveals a government – and country – bitterly divided if not in chaos, the other key feature of recent events is that time is being played for. Say – promise – more or less anything, including six impossible things before breakfast, just to keep the show on the road. And what is that show?

The first objective is for Theresa May to remain prime minister. That necessitates holding the Tory party together, avoiding a general election and getting Brexit done in just under a year’s time. What happens after that is anybody’s guess. A change of tone in Brexiteer rhetoric suggests that they don’t have much idea either, nor do they seem any longer to care very much.

But the clock is ticking, and the Border remains the most obvious – but not the only – potential catalyst for a catastrophic outcome. The British continue to believe that the EU will back down on the issue and accept a magical solution offered by yet-to-be invented technology.

Meanwhile, one of the prime drivers of the original Brexit decision, immigration, reared its ugly head again with revelations of appalling treatment of descendants of the “Windrush” generation, named after the ship that brought some of the first Caribbean immigrants into post-war Britain.

Economists have grown weary pointing out the massively positive benefits of immigration, but it is clear that too many people simply don’t care. Evidence these days is always trumped by how people feel. The identity card is played on a daily basis in British politics and media. A divided country indeed. Britain has an air of instability today greater than I can ever recall.

Financial markets, in particular sterling, have understandably given up trying to make any sense of this. After all, it is all nonsense. Currency markets have retreated back to what they know best and instead just look at the news flow about the economy and interest rates.

Sterling slipped against the euro this week when it became clear that the Bank of England is no longer quite so committed to another interest rate rise next month. The governor of the British central bank this week hinted that incoming data about the economy would probably sway the decision one way or the other – it is not the foregone conclusion that many observers had assumed.

One of the complications for interest rate setters is the behaviour of wages. Despite evidence that the country is running out of workers – where will they come from when immigration is halted? – few people are getting big pay rises. Measures of employment have never been higher (but don’t forget the war cry: immigrants take our jobs).

There is little sign that wages are threatening a general rise in inflation. The spike in import prices caused by the Brexit-induced fall in sterling is fading with not much else happening. Overall growth is pretty feeble and is now threatened by an apparent pause in global growth. That’s right, the world economy’s boom of the last couple of years is taking a breather. Maybe May’s cunning plan is that an economic slowdown will put manners on Brussels.

Markets may be comfortable dealing with economic data and ignoring the chaos that is the Brexit process, but it would be wise to bet that this won’t continue for much longer.

The Brexit clock is ticking and negotiation deadlines are looming. Delay and obfuscation are the clear objectives of the British negotiators. Financial markets can continue to not worry about Brexit for as long as the EU’s negotiators allow the fudging to continue. That may not be for much longer.