The Article 49 strategy to keep Britain in the EU

If the UK wants to reboot its relationship with the bloc, leaving - and then re-entering the EU - could be the answer 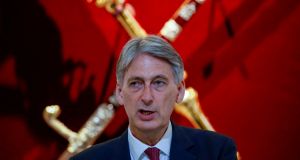 For moderate Brexiters and Remainers, there could be an alternative to Philip Hammond’s strategy of a transitional agreement - re-entering the EU under Article 49 of the Lisbon treaty. (Photographer: Luke MacGregor/Bloomberg)

For moderate Brexiters and Remainers resigned to Brexit the optimal strategy is easy. Simply follow the advice of Philip Hammond, the UK chancellor. A transitional agreement solves almost all of their potential problems — an economic cliff right before the official Brexit date in March 2019; a possible failure of the Article 50 negotiations because of an excessive exit bill — and it gives time to negotiate and implement a trade deal.

A far more interesting question is: what is the optimal strategy for those who still want the UK to be a member of the EU and refuse to accept the result of the referendum as the last word? One way is to hope that the Brexiters do not follow my advice, force an election, lose to a party committed to a second referendum and that the EU accepts Britain’s revocation of Brexit without conditions. Good luck with that.

I would advocate a different path. The transitional agreement will prevent a cliff-edge for the British economy in 2019, but it may still produce one at the end of the transitional period in 2021 or 2022. By then, immigration will no longer be a pressing problem. The UK may face shortages of doctors and nurses and the promises of the Brexiters will have been exposed as fake. The Brexit referendum result will have been formally honoured.

But just as a parliament cannot bind future parliaments, electorates cannot bind future electorates. By then, we will no longer be talking about revoking Brexit, but re-entering the EU under Article 49 of the Lisbon treaty. Those who were 12 years old at the time of the last referendum in 2016 would be eligible to vote. I would presume that young voters would not repeat the mistake of failing to register. Many of the Brexit-supporting older voters will have died. Demography favours Remain, more so in 2022 than in 2018.

You might protest that such a campaign is not winnable. An Article 49 application would force the applicant to accept the entire body of EU law with no opt-out and rebates. So why not just stay in and enjoy the current opt-outs?

I keep hearing that argument, but the UK’s toxic half-in, half-out existence has not really worked out, has it? Never mind that the EU would not be happy with Britain getting back to the status quo ante. An Article 49 accession would offer a second chance. The latest Eurobarometer poll says 54 per cent of Britons feel like citizens of the EU. This is at the lower end of the spectrum of member states, but it could be the core of an Article 49 campaign.

It is unfortunate that advocates of the EU in the UK focus on economics to the exclusion of almost everything else. The biggest single risk to an Article 49 re-entry campaign would be a repeat of the utilitarian, joyless debate of last year. A successful EU campaign would need a fresh advocate, someone who can make a case for membership based on identity, not bean-counting.

What about the euro? In theory, the UK would have to join the eurozone after acceding to the EU. But the reality is that no country will ever be forced to adopt the euro against its will. Sweden and Poland have no formal opt-out, yet neither is going to join.

If you are serious about rebooting the UK’s relationship with the EU, Article 49 is your best bet. A good second bet is an association agreement that goes beyond the single market and customs union.

But there is a catch. Pro-Europeans need to give up on the idea of revoking Brexit before March 2019. They, too, will need Mr Hammond’s transitional period because without it, an Article 49 strategy would be hopeless. If the UK were to drop out of the EU without a deal in 2019, as the more extreme Brexiters want, it would have extricated itself from all aspects of the EU by the end of this parliament. The UK would have its own trade deals in place, making it much harder to get back into the EU.

Of course, it is possible that the Brexiters mishandle the next two years and trigger a sequences of events that ends in the undoing of Brexit before 2019. An Article 49 strategy offers no guarantees, but its success is higher than such an unlikely sequence of events.