Cliff Taylor: Tales of the unexpected as the economy surges

No Brexit hit yet, but Central Bank has cautious eye on future 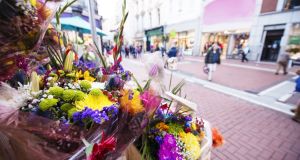 Shoppers pn Grafton Streetin Dublin. The number of people at work is on track to soon return to pre-crisis levels. Photograph: iStock

“In Ireland the inevitable never happens and the unexpected constantly occurs.”

The words of former Trinity College classicist and provost John Pentland Mahaffy, were quoted by Central Bank chief economist Gabriel Fagan as he presented the bank’s latest forecasts for the economy on Friday.

The forecasts were remarkably upbeat, with growth storming head and the number of people at work due shortly to return to pre-crisis levels. But as Fagan pointed out, the small and open Irish economy is always at the mercy of international factors - and the approach of Brexit presents a particular risk. In presenting an upbeat picture, the bank is also laying down a clear marker of this potential problem ahead.

Like most forecasters the Central Bank cut its estimates for growth in the immediate wake of the Brexit vote. Before the vote in June 2016, the Central Bank had anticipated Irish GDP growth of 4.2 per cent this year. It subsequently revised this down to 3.6 per cent and then 3.3 per cent.

But the anticipated Brexit hit to growth has not occurred - not yet anyway. Now the bank’s growth estimate is back up higher than the initial prediction, with GDP growth now forecast at a strong 4.5 per cent this year and the 2018 growth estimate increased by 0.4 of a point to 3.6 per cent.

Growth this year has outpaced expectations - the unexpected has, indeed, occurred.The domestic economy is steaming ahead and the bank pointed out that job creation in the first quarter was running at a record rate. It now anticipates that total employment this year will be 61,000 above 2016 levels, bringing job numbers back to the pre-crisis peak of 2.1 million. The creation of a further 42,000 jobs next year would, if it happens, bring the unemployment rate down close to 5.5 per cent.

While the bank is loath to comment on the political decisions behind the Budget, Fagan emphasised that caution was needed. National debt is still high - as highlighted by the fact that it amounts to 106 per cent of the new measure of the size of the economy factoring out multinational distortions - GNI*. It was open to the Government to fund new investment plans by finding savings or raising new revenues elsewhere, rather than pushing up borrowing, Fagan pointed out. Also, while there is no clear evidence of overheating, the bank is clearly wary that before long capacity problems could start to appear.

It is in many ways an unusual economic picture. Despite strong growth, inflation remains largely absent - prices are due to rise by only 0.3 per cent this year - as the ECB struggles to get prices moving higher. And no inflation makes life harder for those still holding debts after the crash. The debts of households and businesses also remain high, at just under 69 per cent of the new GNI* measure.

Will the Brexit hit finally come? Fagan pointed out that Britain’s departure from the EU, due in Spring 2019, was beyond the bank’s forecasting horizon. He also said that, depending on how the talks go, confidence and investment could be hit here next year in the run up the actual exit. But for the moment, like the rest of us, the bank has no firm information on what Brexit will look like. In the meantime, it appears that consumers and businesses here are just getting on with it.