Dublin rooms eighth cheapest out of 10 cities surveyed in Europe 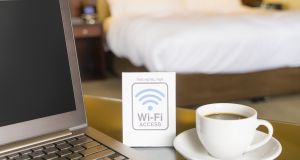 Dublin hotels are expected to secure an average daily rate of between €132 and €140 in the second half of the year.

According to data from travel research company STR, room rates will rise by between 5.5 per cent and 7.5 per cent in the capital by the end of the year. The average daily rate in the first half of the year was €132.60 in the city, and €122.85 for the State as a whole.

STR’s figures were published in response to a report last week from Hotel Reservations Services, which suggested that Dublin hotel room prices had jumped by 9.2 per cent in the last 12 months to €213.

That figure would make Dublin the second most expensive location for a hotel room in Europe behind only Oslo, and ahead of London.

STR’s research, however, puts Dublin in eighth place out of 10 locations in Europe, behind such cities as Paris, Zurich, London and Rome. The highest average daily rate in the STR data was in Paris at €236.13, while the lowest was in Brussels at €111.77.

However, when it comes to occupancy rates Dublin is the highest of those surveyed at 80.71 per cent. STR suggests that this is likely to drop in the next two year as the market prepares to add more than 1,000 hotel rooms to its existing stock.

Regional Ireland was the main driver of the State’s strong occupancy performance. Hotel occupancy outside of Dublin increased by three percentage points to 67.3 per cent in the first six months of 2017.

The occupancy rate for Ireland as a whole in the first half of the year was 75.4 per cent – higher than the figure for Paris, Zurich, Rome, Athens and Brussels.

Speaking on factors that may cause occupancy rates to drop, Sarah Duignan, director of client relations for STR, said: “The devaluation in sterling following last year’s Brexit vote has clearly caused a shift to domestic travel for many British residents.

“But it is encouraging to see that the void left by UK visitors to Ireland has been filled by other source markets like the United States. This increase in demand has helped boost the market’s average daily rate, although it is still far from being one of Europe’s most expensive hotel markets.”

STR and its forecast partner, Tourism Economics, predict that arrivals from the US should grow 4.5 per cent per year on average through 2021, with increases in arrivals also expected from other markets. These include France and Germany, which could jump by 3.3 and 3.4 per cent respectively.