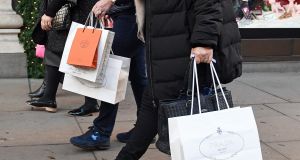 Consumer spending fell for the third month in a row in July, marking the biggest period of decline seen since 2013, a report has found. Photograph: Victoria Jones/PA Wire

British consumer spending fell for the third month in a row in July in its longest losing streak in over four years, according to data released on Monday, in another sign that the impact of last year’s Brexit vote is rippling through to households.

That was quicker than June’s 0.2 per cent fall, and following a further drop in May it marks the longest consecutive decline since February 2013, when a still-frail economy was struggling to recover from the financial crisis.

Last week the Bank of England downgraded its forecast for economic growth this year and next, due partly to slower-than-expected wage rises, and it sees a weaker outlook for household spending than for other sectors of the economy.

Visa’s data chimed with other signs that households are under financial pressure - from lackluster retail sales to falling new car registrations and mortgage approvals.

A fall in the value of sterling since the Brexit vote in June last year has stoked inflation at a time when wage growth is slowing, squeezing incomes. Consumer confidence dropped to a one-year low in July, according to market research firm GfK.

Spending on transport and communications and on clothing and footwear took the biggest knocks, down by 6.1 per cent and 5.2 per cent respectively.

The fall in sales of clothing - a sector especially reliant on imports - was the second-biggest in five years, after an even larger drop in May.

Clothing sales had enjoyed a boost early in July due to better-than-usual summer weather, a survey from the Confederation of British Industry showed, but since then both the weather and the picture from other retail measures has been gloomier.

Visa pointed to continued strength in spending on hotels, restaurants and bars, as sterling’s weakness deterred Britons from going abroad.

“The sector is likely to have benefited from an early surge in summer staycations, as the weak pound made holidaying at home more attractive,” Jenkins said.