Amazon hits an ace, Paris goes for gold and the Iron Bank calls in its debts

Planet Business: It’s been a Rolls-Royce of a week 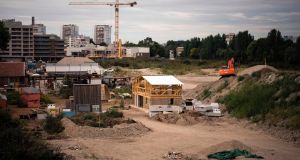 Sacre bleu: the construction Olympics are about to ramp up in Paris, France. Photograph: Lionel Bonaventure/AFP/Getty

Annual sum that Amazon Prime Video is thought to be paying for rights to the ATP men’s tennis tour (which excludes Grand Slams), in what is Amazon’s first major sports rights foray outside the US.

Tennis rights that Sky will hold from 2019. Its chief executive, Jeremy Darroch, recently said the broadcaster had “walked away” from some potential bids.

Sum that Sky and BT Sport stumped up between them for English Premier League rights last time out. With the battle for the next rights deal set to begin soon, the risk is Amazon is only warming up with its spot of tennis.

Image of the week: Olympic dreams

Here we go again: Behold the building site for the Olympic village in Saint-Denis, a commune in the northern suburbs of Paris. After the International Olympic Committee confirmed in June that it would announce the host city for the 2024 and 2028 Summer Olympics at the same time, it was generally thought that the “loser” in the two-horse race for 2024 would be awarded the silver medal of 2028. But now Los Angeles has formally announced its intent to host the 2028 Games, so it’s a question of getting the cement mixers turning, rounding up the usual sponsors and assuring French taxpayers that the whole endeavour will be worth staging in seven years’ time.

Some very clever people are talking about the world being in the midst of the “fourth industrial revolution”, which World Economic Forum founder Klaus Schwab defines as “a fusion of technologies that is blurring the lines between the physical, digital and biological spheres”. But what self-respecting fusion of technologies has an old-world name like “fourth industrial revolution”? Racing up the jargon charts is “Industry 4.0”, which signifies any happy unison between robotics and computer systems equipped with machine learning algorithms. Essentially, if a system or factory requires minimal human input, it’s a proud part of Industry 4.0 and it’s probably time to go on Holiday 5.0.

Getting to know: Warren East

Two years after the then new chief executive of Rolls-Royce blamed a string of profit warnings on “accounting fog” and “mud in the system”, Warren East (55) is now enjoying much smoother driving conditions at the company. On Tuesday, he got to announce that first-half profits at the aircraft engine maker had doubled and its share price rose 10 per cent. East, as well as being credited with turning the company around, is also being hailed for perfecting that age-old trick, “under-promising and over-delivering”. In another smart move, he recently hired one of Rolls-Royce’s fiercest skeptics, Deutsche Bank analyst Ben Fidler, as financial planning and analysis director – either to bring the right sort of “challenge” to the company or silence his biggest critic, who can say.

In Game of Thrones, members of the Lannister family like to bang on about how they always pay their debts – a promise on the verge of being tested now their biggest creditor, the mysterious Iron Bank of Braavos, is calling one in. But what other banks are purely a figment of the imagination?

1. Tellson’s: With offices in both London and Paris, the Dickensian bank’s “triumphant perfection of inconvenience” features in A Tale of Two Cities.

4. Gringotts Wizarding Bank: This “snowy white building”, frequented by one Harry Potter, is an ancient institution run by goblins for some reason.

5. Jackson Steinem & Co: If you really want to, you can buy T-shirts bearing the logo of the brokerage in the 20-year-old Wall Street.