Single buyers hit the most by rising property prices 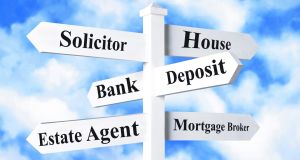 In Dublin a couple who are first-time buyers were spending 27.4% of their after-tax income servicing their mortgage in May: Photograph: Getty Images

Buying a home is requiring an ever-increasing portion of your income, with affordability ratios now at a nine-year high.

Single buyers are most impacted by rising prices, according to the latest EBS/DKM Affordability Index.

The average single buyer earning one and a half times the average income (€56,325) will see 34.5 per cent of their after-tax income go on servicing a mortgage by the end of the year. That is even after factoring in the impact of a 5 per cent deposit through the Help-to-Buy scheme.

It’s the highest level since 2008, when the property boom was teetering and single buyers needed to put 40.3 per cent of their net income towards their mortgage.

Typically, a sustainable mortgage should account for no more than 38 per cent of a person or couple’s net income, and the latest figures show that single people across the State are coming very close to this ratio.

Areas such as Dún Laoghaire-Rathdown in Dublin have now become almost unaffordable for single buyers, with a typical first-time buyer paying over half of their net income (53.5 per cent) in mortgage repayments in this area.

Across the city in Fingal, for example, a single buyer will see just 36 per cent of their net income go on their mortgage.

Outside of the capital, areas such as Limerick city (18.6 per cent of net income), Leitrim (15.9 per cent) and Longford (14.6 per cent) all remain affordable for single buyers.

Affordability is also being squeezed for couples. As supply continues to tighten, prices continue to rise. Incentives such as the Government’s Help-to-Buy scheme are also hitting affordability. While it gives first-time buyers up to €20,000 in tax relief to help them buy, the scheme may also be pushing up prices, thereby negating any benefit of the incentive.

As the report notes, in May 2015 the proportion of disposable income required to fund a mortgage for the average first-time buyer working couple was 18.7 per cent across the State. This has increased to 21.2 per cent in May 2017, and is forecast to rise further through the remainder of 2017.

According to EBS-DKM, the Help-to-Buy scheme will only have a positive impact on affordability “provided it is accompanied by an increase in new house building”. And this has yet to take off to any great extent.

In Dublin, a couple who are first-time buyers were spending 27.4 per cent of their after-tax income servicing their mortgage in May, up from 25.5 per cent a year earlier, and a low of around 17 per cent in 2012.

EBS-DKM expects the proportion will rise to 29.2 per cent by the end of the year.

“We are seeing an upward trend in the proportion of disposable income required to fund a mortgage for first-time buyers over the last two years, and we expect that proportion required to continue to rise.”