Cantillon: US could impose border tax, hitting US pharma companies based in Republic 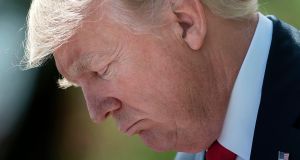 At the very least the Trump rhetoric looks set to keep up the pressure on big players to invest at home. Photograph: Brendan Smialowski/AFP/Getty Images

The Trump administration has asked the US department of commerce to report to it in 90 days on the country’s $500 billion trade deficit of imports over exports.

Commerce secretary Wilbur Ross, writing in the Financial Times, said a range of factors would be included in the analysis – including currency factors, trade barriers and other allegedly “unfair” practices.

There is no doubt that China is the main target, with a surplus of $347 billion with the US. But also named in the list of countries with a surplus in trade with the United States is Ireland.

This is mainly due to US pharma companies who export significant amounts of product back to the US. This is unlike other US companies here, who mainly export to the European Union and other non-US markets.

Is Ireland exposed? Despite the supportive statements when Taoiseach Enda Kenny visited the White House, the study will again put the focus on Irish tax structures. At a time when the Apple controversy is still in the headlines, this is unwelcome.

What could the US do? The first thing to recognise is that its policy actions in relation to Ireland would be limited. And we must hope that most of the attention is on China, its currency and aspects of its trade policy.

However, we may not escape unscathed. At the very least the Trump rhetoric looks set to keep up the pressure on big players to invest at home.

At worst, the US could press ahead with plans for a new border tax, specifically hitting companies who import into the US and giving manufacturers a financial incentive to manufacture in their domestic market. This could change the economics of manufacturing in Ireland for the US.

The IDA and the pharma sector will hope that, as in other areas, the Trump policies are not as damaging as threatened during the campaign. But a worrying three months lie ahead. There is no doubt that the proposed border tax is among the most damaging Trump proposals for Ireland. There is huge debate about it in the US – and significant opposition from importers. But big exporters have rowed in behind it – and Trump needs a few wins .

This proposal is not dead yet.