US companies hire most workers in over two years 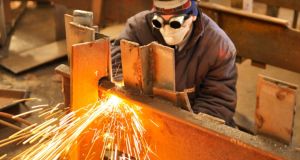 US companies added 263,000 workers in March, the most since December 2014, according to payrolls processor ADP. Photograph: Getty Images/iStockphoto

US companies added 263,000 workers in March, the most since December 2014, suggesting further tightening of the labour market, payrolls processor ADP said on Wednesday.

Strong job gains in the coming months will likely add upward pressure on wages, supporting the Federal Reserve’s view for at least two more interest rate increases by the end of 2017.

“The labour market is tight and it will get tighter,” said Mark Zandi, chief economist at Moody’s Analytics which jointly developed the ADP National Employment Report.

ADP’s March figure easily beat the median forecast of 187,000 increase among economists surveyed by Reuters. Private payroll gains in the month earlier were revised down to 245,000 from the originally reported 298,000.

The ADP figures come ahead of the US labour department’s more comprehensive non-farm payrolls report on Friday, which includes both public and private-sector employment.

Economists polled by Reuters are looking for US private payroll employment to have grown by 175,000 jobs in March, down from 227,000 the month before. Total non-farm employment is expected to have risen by 180,000.

The unemployment rate is forecast to stay steady at the 4.7 per cent recorded a month earlier. Wage growth has been running at a 2.5 to 3 per cent year-over-year pace, which is modest by historical standards, Zandi said.

One factor that may lead to faster wage gains is the uncertainty on immigration policy. Stricter immigration as proposed by the Trump administration would reduce labour supply, forcing employers to compete for workers.

“The labour shortage might be exacerbated by immigration issues,” Zandi said. If immigration were cut in half, that could choke off domestic labour growth which is currently running at 3-4 per cent a year, according to Zandi.

1 Admission of mistake in Oxford vaccine dose raises doubts over reliability
2 Move to EU or face disruption, City of London is warned
3 Cliff Taylor: Deal or no deal we are now heading for a hard Brexit
4 Karlin Lillington: How I managed to cut my mobile phone bill by at least half
5 Irish Life fund pays €49m for 94 Dalkey apartments
6 Fiona Reddan: Who’s afraid of Revolut? Not AIB and BOI it seems
7 Fenergo named Irish technology company of the year
8 Lahinch Golf Club runs out of its own cash after €3m Covid-19 hit
9 Central Bank rules out changes to mortgage rules during pandemic
10 Last orders for Rí-Rá nightclub and The Globe after green light for Central Hotel revamp
Real news has value SUBSCRIBE