Economy set to grow 4.25% this year despite Brexit uncertainty

Growth forecast increased by Department of Finance from 3.5% prediction 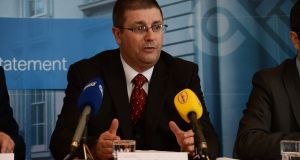 Ireland is set to increase its economic growth forecast for this year to between 4 and 4.25 per cent but updated figures due next week will reflect increased uncertainties led by Brexit in later years, according to the secretary general of the Department of Finance.

Ireland’s economy was the best performing in the European Union for the third year in a row last year after gross domestic product grew by 5.2 per cent, beating forecasts that were trimmed back following neighbouring Britain’s vote leave the EU.

In its last update in October, the finance department saw GDP growing by 3.5 percent in 2017, but it said on Wednesday that it had yet to see a hit from Brexit and there was nothing to suggest that the economy had slowed in the first quarter.

“Quarter three and quarter four (GDP) returns showed that the second half of 2016 was much stronger than had been assumed,”

Department of Finance secretary general Derek Moran told a parliamentary committee. “It would be reasonable to expect the figure next week to improve to between 4 and 4.25 per cent for this year.”

Mr Moran said he anticipated, therefore, that “forecasts for the outer years will reflect increased levels of external uncertainty”.

He also said figures on Tuesday that showed income tax receipts came in 3.9 per cent behind target in the first quarter, despite continued sharp falls in unemployment, were “puzzling rather than worrying” and that the department was unlikely to change its tax revenue forecast for 2017 next week. – (Reuters)