Cantillon: Talk of war over Gibraltar distracts from negotiation of transition deal 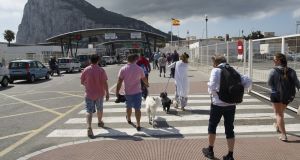 Michael Howard said Britain could even go to war against Spain to protect the sovereignty of Gibraltar. Photograph: Pablo Blazquez Dominguez/Getty Images

In the intriguing world that will be the talks on Brexit, there appear to be two parallel tracks under way. In one, it is all noise and fury. This was highlighted most spectacularly by the utterances coming from some leading Conservatives, among them ex-Tory leader Michael Howard, who said Britain could even go to war against Spain to protect the sovereignty of Gibraltar. Which is nonsense.

Being taken more seriously in other EU capitals are the apparent threats from London to withdraw security co-operation if a trade deal is not done.

On the other track, however, a series of authoritative reports, backed up by sources in Dublin, say a more pragmatic process is under way. Diplomats are trying to sketch out what a Brexit deal might look like . . . because that is actually the kind of thing which diplomats do.

This would remove one threat for Irish trade: that of tariffs being slapped on as soon as Britain left, hitting sectors such as food in particular. Britain would probably still leave the customs union, however, meaning some kind of border controls would be imposed. Meanwhile, other complex regulatory hurdles would also need to be jumped to avoid other damaging barriers to trade.

In this regard, some are also pointing to some conciliatory comments from British prime minister Theresa May last week, when she said in her speech to the House of Commons that Britain and the EU “should prioritise how we manage the evolution of our regulatory frameworks to maintain a fair and open trading environment, and how we resolve disputes”.

There is thus a possible deal which would involve Britain remaining under the control of some EU regulators and tariff-free trade in goods continuing for a period after Brexit, and perhaps being tied down beyond that in a longer-term trade deal. This would still leave tricky negotiations in areas such as financial services, of course.

And all sides agree that this diplomatic manoeuvring may collapse if Britain and the EU cannot strike a deal on the first item on the agenda: Britain’s exit bill.