Reality bites as Oculus Rift inventor moves on from Facebook 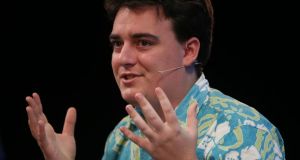 Oculus VR founder Palmer Luckey: an increasingly rare figure at Facebook events after claims that he had donated $10,000 to a pro-Trump group. Photograph: Niall Carson/PA Wire

The fresh face of virtual reality, Palmer Luckey, the man behind the Oculus Rift, has parted ways with Facebook, just over two years after the social media company snapped up his business.

The 24-year-old tech entrepreneur originally teamed up with Brendan Iribe and raised $2.4 million through crowdfunding platform Kickstarter to make the Oculus Rift. The deal with Facebook boosted his net worth to more than $500 million – not a bad achievement for your early 20s.

Perhaps the writing was on the wall. Luckey had been an increasingly rare figure at Facebook events after claims that he had donated $10,000 to a pro-Trump group, Nimble America, that was creating and distributing anti-Hillary Clinton memes in the run up to the US election.

With Silicon Valley an overwhelmingly Democrat enclave, the actions were bound to be viewed harshly. There were reports of companies saying they wouldn’t work with Oculus as a result, and female Facebook employees resigning from the company in the wake of the allegations.

Luckey kept a low profile in the aftermath. The Oculus developer conference in October seemed to be a Luckey-free zone and, when the company had a reshuffle in December with Iribe stepping down as chief executive, Luckey’s name wasn’t thrown into the mix in relation to the new “leadership” role it was creating.

Facebook has also found itself embroiled in a legal action over claims that Oculus stole the technology on which it based its product. The lawsuit filed by Zenimax has cost Facebook millions and comes at a time when virtual reality is looking less of the sure thing that some had hoped and more of a work in progress.

The last time Luckey represented Facebook in public was to testify in court in the Zenimax trial.

Perhaps it wasn’t such a Luckey break after all.