State contract with Eir potentially queers pitch for the other two bidders, Siro and Enet 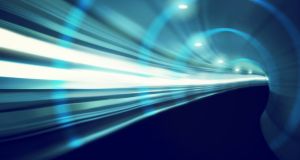 The National Broadband Plan coverage of 542,000 homes rather than 840,000 comes after a deal with Eir, to provide coverage to 300,000 homes originally earmarked for inclusion in the plan as part of its own commercial rollout

The National Broadband Plan will now cover just 542,000 homes rather than the 840,000 targeted at one stage, according to an internal Department of Communications memo.

The reduction comes on foot of deal between the department and the State’s largest telco, Eir, which has promised to provide coverage to 300,000 homes originally earmarked for inclusion in the plan as part of its own commercial rollout.

The company has been accused by rivals of gaming the process by including the homes in its investment plan at the last minute, having previously deemed them uneconomic.

The stakes are high and losing a major State contract in its own backyard could kill Eir’s plans for a possible flotation next year.

However, by allowing the former State monopoly to pick off the low hanging fruit – the 300,00 homes represented the quasi commercial end of the project – the department has potentially queered the pitch for the other two bidders, Siro and Enet, and opened up the possibility of a legal challenge.

Unless the department can convince them that the tender hasn’t been tipped in favour of Eir, they may now exit the process and seek legal compensation, which would be a disaster for the Government.

To keep keep them sweet, the department will almost certainly have to guarantee all parties access to Eir’s infrastructure at the edge of the intervention area and for a reasonable price – no easy task.

Details of the department’s “commitment contract” with Eir were scant on Monday but the Minister has promised to publish the contract terms at a later date.

None of this may prevent a legal challenge from one of the firms ejected at an earlier stage. Dublin-based Imagine is known to have been unhappy at how its bid was handled and the department’s seeming preference for fibre broadband over its wireless offering.

The Government is expected to stump up about half the cost of the project, which could run to between €1 billion and €1.5 billion. However, the State subsidy may now have to increase as a result of the removal of 300,000 homes. This is because the revenue derived from these units would have part-funded the cost of bringing broadband to more remote locations. Now they’re gone, the firms may seek a bigger cheque from the State.