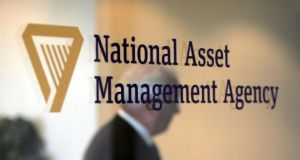 The National Asset Management Agency (Nama) redeemed €952 million of senior notes on Wednesday, leaving it with less than 2 per cent of its original €30.2 billion debt.

Nama said following its second redemption of the year that the amount of senior debt redeemed to date totals €29.7 billion, equivalent to more than 98 per cent of the senior debt originally issued in 2010 and 2011 to acquire toxic bank loans.

The agency’s remaining senior debt now stands at €500 million and this is due to be redeemed later this year.

“Nama is close to achieving, three years ahead of schedule, its primary commercial objective of redeeming its senior debt and thereby eliminating this contingent liability for Irish taxpayers,” said chief executive Brendan McDonagh.

“Elimination of the contingent liability is a significant achievement in itself but it has also contributed to stabilising and reducing the funding cost of Ireland’s debt,” he added.

1 Admission of mistake in Oxford vaccine dose raises doubts over reliability
2 Cliff Taylor: Deal or no deal we are now heading for a hard Brexit
3 Move to EU or face disruption, City of London is warned
4 Karlin Lillington: How I managed to cut my mobile phone bill by at least half
5 Last orders for Rí-Rá nightclub and The Globe after green light for Central Hotel revamp
6 Irish Life fund pays €49m for 94 Dalkey apartments
7 Fiona Reddan: Who’s afraid of Revolut? Not AIB and BOI it seems
8 Central Bank rules out changes to mortgage rules during pandemic
9 Fenergo named Irish technology company of the year
10 Lahinch Golf Club runs out of its own cash after €3m Covid-19 hit
Real news has value SUBSCRIBE