Space tourists, money launderers and the vogue for ‘customer obsession’

Planet Business: In a week of no-deal friction, Tesco’s new store is a Brexiteer’s paradise 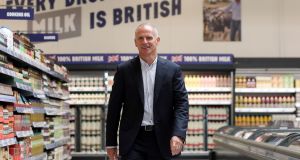 Every drop of fresh milk in Tesco-owned Jack’s is British, got that, British? Union Jacks adorn the aisles of the shop, located in a previously mothballed Tesco outlet near Cambridge, so no customer can forget that this retailer is British, not German like those pesky Tesco rivals Aldi and Lidl.

Walking through this Brexiteer-pleasing grocery haven without a shopping basket is Tesco chief executive Dave Lewis, the man who has decided that what Britain needs is another discount supermarket chain (and the emphasis on provenance is nothing to do with Brexit, he says). Jack’s is named after Jack Cohen, the man who founded Tesco as a bunch of market stalls in 1919. Pile it high, sell it cheap, was his motto. Unfortunately for the Tesco of this century, there are others out there piling it higher and selling it cheaper.

€200 billion
Eye-popping sum of money believed to have been laundered through Danske Bank’s Estonian operation between 2007 and 2015. Chief executive Thomas Borgen quit this week saying it was “best for all parties” that he resigned.

10,000
The allegations relate to this number of customers, who were neither living nor doing in business in Estonia, but were based in places like Russia, Azerbaijan and Ukraine. They just all had a soft spot for a bank in Tallinn.

33
Percentage decline in Danske’s stock in 2018 so far, as investors reacted with what seems like highly appropriate alarm to the threat of a major scandal. It now appears that concerns raised by a whistleblower in 2014 were, in time-honoured whistleblower fashion, almost totally ignored.

I choose to go to the moon, with Artists. #dearMoon https://t.co/ivMypEcWBZ

A delivery driver for an Amazon contractor ran over actor Liz Hurley’s dog, it emerged last weekend. In response to the ensuing media coverage, Amazon said the incident “does not reflect our high standards for customer obsession”. It turns out this is not a typo, nor does Amazon have some weird fixation on the star of The Royals and the Austin Powers movies.

“Customer obsession” is Silicon Valley’s term for, well, putting the customer first. And although hiring contractors that, in turn, employ drivers who run over much-loved pets is not generally regarded as putting the customer first, Amazon and its chief executive Jeff Bezos have been using the term for donkeys. By “obsessing” with customers, it doesn’t let itself get distracted by competitors, it insists. Indeed, why would it, when so many of them have gone out of business?

Getting to know: Yusaku Maezawa

Yusaku Maezawa is a Japanese art collector, clothing entrepreneur and, perhaps more crucially in this context, billionaire with designs on being the Earth’s (if not the universe’s) first private space tourist. SpaceX chief executive Elon Musk (in a busy week for him) unveiled Maezawa as the first customer it intends to take on a trip around the moon on a future space vehicle called the Big Falcon Rocket. A down payment has been made for the adventure, which will happen in 2023 at the earliest. Maezawa wants to turn the entire experience into an art project with the hashtag #dearMoon, but he doesn’t fancy a solo trip – the founder of Japan’s Zozotown clothing site is inviting up to eight artists to join him on this mission. “These artists will be asked to create something when they return to Earth,” he explains. Ah, basically like a work trip then.

Well, it’s coming up on six months to go before “Brexit Day” and still no sign of a breakthrough in Westminster, where no-deal die-hards continue to suck political oxygen. When it comes to the impact of a chaotic divorce between the UK and the EU come March 29th, few are now holding back.

1. The International Monetary Fund: “If that happened, there would be dire consequences,” said IMF managing director Christine Lagarde this week.

2. The British police: A disorderly crash out of the EU poses a risk to public safety as the police could lose access to cross-border investigative powers and databases, officials have warned home secretary Sajid Javid.

3. Liberal Democrats: The party’s influence has waned, but it nevertheless provides the clearest parliamentary opposition, with leader Vince Cable insisting that Brexit “can and it must be stopped”.

4. The car industry: A UK representative body for manufacturers and traders says a no-deal Brexit is “not an option” for the automotive sector, while Honda and BMW have also been vocal of late about the effect on their operations come March.

5. Tony Blair: The former British PM everyone loves to hate has cheered everyone up by predicting a continuation in the political paralysis, noting also that the current Chequers proposals are “doomed to fail”.