Lifting of milk quotas raises farming output to over €8bn 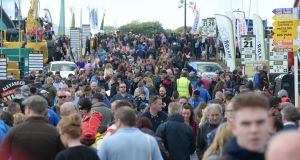 Irish farm output has jumped by nearly 50 per cent since 2010, driven by the lifting of milk quotas in Europe, a new Central Bank study has revealed.

However, the research, published to coincide with the National Ploughing Championships, which takes place in Tullamore, Co Offaly this week, warned that the low profitability associated with some farming activities here left the sector highly exposed to potential negative shocks from Brexit or a cut in the EU’s Common Agricultural Policy (CAP) budget.

Despite a rise in exports to non-EU markets, the sector remains heavily reliant on the UK market, which still accounts for around 40 per cent of Irish food exports. The “considerable challenge” posed by a hard Brexit, could lead to the imposition of hefty tariffs on Irish produce entering the UK.

Following a long period of stagnation from 1990 to 2010, agricultural output has increased significantly over recent years, driven in the main by the dairy sector following the removal of EU milk quotas in 2015. Gross farm output in 2017 was just over €8 billion, compared to €5.5 billion in 2010. That latter figure was up only slightly on the €5.2 billion in output back in 1995.

Nonetheless, the report noted that farm incomes here were still heavily reliant on European farm subsidies. In 2017, direct payments from Brussels accounted for 22 per cent of farm income on dairy farms. That rose dramatically – to 114 per cent and 115 per cent – for cattle and sheep farms respectively.

The report warned that the EU’s CAP budget was likely to be cut further as a result of the UK’s departure from the bloc.

Climate change targets It also cautioned that the Department of Agriculture’s aim to increase the value of agri-food exports by 85 per cent by 2025, contained in its FoodWise 2025 strategy, was not necessarily compatible with the State’s climate change targets.

“Agriculture makes a significant contribution to the Irish economy. Employing more than one in seven people in some regions, it is clear that the sector plays an important role in many of our rural communities,” Central Bank deputy governor Sharon Donnery said.

“However, Brexit continues to pose huge uncertainty to the Irish economy overall, and today’s research spells out the specific challenges faced by those working in the agri-food sector across the country.

“The increase in exports to markets outside the UK is to be welcomed and can be built upon, but the fact remains that a hard Brexit which reduces market access for Irish exports would have a material negative effect on Irish agriculture and adjusting to this in the short-term would prove a considerable challenge,” she said.

“Once again, this serves to underscore the importance of progress in negotiations as the March 2019 deadline fast approaches.”

An estimated 291,500 visitors are expecting at the three-day ploughing championships, starting today. The event will include more than 300 competitors and 1,700 vendors exhibiting their products at stalls around the site in Screggan.