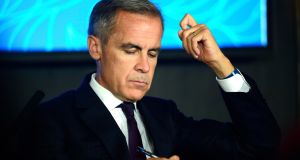 Bank of England governor Mark Carney at the Central Bank in Dublin where he gave the annual Whitaker lecture. Photograph: Cyril Byrne

The more open nature of the UK economy after Brexit will make it more important for both it and the Irish economy to be resilient to global economic shocks, Bank of England governor Mark Carney said in speech in Dublin on Friday.

Delivering the Central Bank of Ireland’s annual Whitaker lecture, Mr Carney said the UK regulator was confident that the British financial system would be able to continue to function in the event of a no-deal Brexit.

Stress tests on UK banks have been used to explore the dramatic scenarios that might arise from a “disorderly” Brexit, including the possibility of a “severe and I mean very severe” recession, he said.

These tests have allowed the regulator to “feel very confident” that the system will be able to continue to lend.

“Our job, after all, is not to hope for the best, but to prepare for the worst,” the governor said.

Mr Carney noted that the UK economy is “heavily dependent on the form Brexit takes”, adding that he would expect the economy to become a “very open” one, whatever the outcome.

“If you’re going to be open, you need to be resilient,” he said, referring to both the UK and Irish economies.

It is necessary to “assume things will go wrong” in order to “ride out” shocks posed by events in the global economy, including shocks that might take place in Asian markets, he said.

Mr Carney’s lecture follows the announcement earlier this week that he will continue as governor until the end of January 2020, extending his tenure by seven months to help “support continuity” in the months after the UK leaves the European Union, scheduled for March 29th, 2019.

Mr Carney also attended part of a meeting of the British cabinet on Thursday to discuss preparations for Brexit, including the Bank of England’s planning for a no-deal scenario.

He was reported to have told senior UK government ministers that a chaotic departure from the EU could lead to house price falls of up to 35 per cent over three years as well as spiralling interest rates.

The Central Bank’s Whitaker lecture, in its eighth year, is named in honour of economist and public servant TK Whitaker, who died last year aged 100.

Mr Carney, a Canadian who also holds Irish citizenship, said part of Mr Whitaker’s life work was a reminder that to achieve lasting economic prosperity requires policymakers “to be bold and to adapt”.

The Bank of England governor’s lecture focused on the potentially difficult transition period between the development of new technologies and the economic growth that this typically brings about.

In the so-called fourth industrial revolution - characterised by technologies such as robotics, artificial intelligence, biotechnology and 3D printing - workers may not be able to “seamlessly” move to new jobs, nor will many be able to afford to retire in response, Mr Carney warned.

Frictions in labour markets, especially “skills mismatches”, may lead to depressed sectors of the economy and an increase in inequality in this period, before the likely productivity gains can begin to compensate.

Unlike in previous industrial revolutions, the types of jobs that could be affected this time “lie across the entire spectrum of wages”, he said, placing the proportion of jobs at risk of automation in Britain and Ireland at 10-15 per cent.

“Obviously, this is a rough estimate.”

It is not the role of central banks to either prevent or accelerate this expected structural change in the labour market, Mr Carney added, but they do need to acknowledge it when they consider their approach to monetary policy.

1 Opioid executive admits to ‘no morals’ ahead of prison term
2 South Dublin Credit Union members urged to borrow more to ensure survival
3 Are there annual limits on inheritances or gifts to a child?
4 American YouTubers embrace the crisp sandwich
5 From chips to €14bn in trade: Ireland and Italy’s enduring exchange
6 Who are Ireland’s 17 billionaires?
7 Election proposals may make the housing crisis worse
8 NI businesses fear burden of post-Brexit red tape on goods transport
9 Farmer seeks to challenge €3.6bn Intel plan in High Court
10 Help, I’ve no PRSI stamps – can I still get a pension?
Real news has value SUBSCRIBE