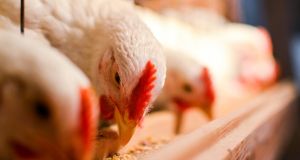 Turnover at Moy Park grew to a record £1.5 billion last year, with pretax profits hitting a high of £64.5 million.

The food company, which was acquired by Brazilian-owned Pilgrim’s Pride last September, grew its turnover by 8 per cent in 2017 despite what it described as “challenging” market conditions.

The group, which was founded in Tyrone in 1943, is headquartered in Craigavon and employs more than 9,800 people across 10 processing facilities in Northern Ireland, the Republic, France and England.

Flavio Malnarcic, head of integration at Moy Park, said in a strategic report with the accounts that the group had delivered a “strong financial performance in 2017” in what was a “a changing, competitive landscape and a market still facing significant commodity cost inflation”.

“We have begun the integration process with our new parent company. Pilgrim’s Pride is the second-largest chicken producer in the world and we are very enthusiastic about the opportunities that this offers the business to both continue and accelerate its journey in delivering further growth and operational efficiency,” Mr Malnarcic said.

When Pilgrim’s Pride acquired Moy Park for $1.3 billion last September, it said it anticipated the transaction would deliver “incremental annual revenue of approximately $2 billion”. It also outlined that it expected to save “$50 million” in annual cost savings over the next two years following the deal.

According to Mr Malnarcic, its new owners also invested £40 million in infrastructure projects in 2017, funded by the “generation of a positive underlying free cash flow”.

The accounts note that Moy Park had to pay more for raw materials and consumables during 2017 than a year earlier with its annual bill rising by more than £100,000 to more than £857,000. According to Moy Park a significant portion of the group’s costs arises from the ingredients used in feed grain. The cost of these can be affected by a range of factors including the weather.

Mr Malnarcic also stressed that the group was “dependent” on a range of providers for the supply of raw materials to its farms and processing sites. “Any interruption to this supply would lead to delays in production for our customers,” he warned.

The accounts show that Moy Park finished the year with net assets of more than £294.5 million, which represented a 19 per cent increase on the year.