New banknotes will enter circulation next May 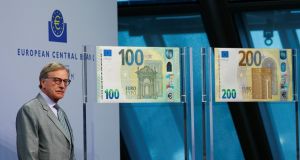 The European Central Bank unveiled new, more secure, €100 and €200 banknotes which will enter circulation in May 2019.

This banknote series was called the Europa series because two of their security features contain a portrait of Europa, a figure from Greek mythology. This series of banknotes offers better protection against counterfeiting, the European Central Bank said.

The new banknotes have features allowing them to be clearly identified by the naked eye. They’re also smaller than the previous notes, so that they can better fit in wallets and last longer.

Additionally, there are machine-readable security features in the notes. ECB executive board member Yves Mersch, in his speech unveiling the new notes, said the entire set of euro banknotes were more secure as well as easier to check and handle.

Avoiding counterfeiting and ensuring banknotes are not used in criminal acts has been a focus of the bank, which announced in 2016 it was discontinuing the €500 banknote having taken “into account concerns that this banknote could facilitate illicit activities”.

Despite a rise in transactions with cards, the ECB noted that the demand for cash continues to grow. Since the introduction of the euro in 2002, the number of banknotes in circulation in the euro area has tripled and now stands at 21 billion, while the value of banknotes has reached almost €1.2 trillion, the bank said.