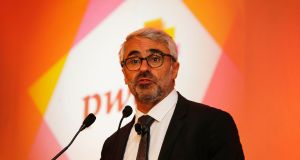 EU countries could agree a new short-term digital sales tax to apply to many of the major tech firms before the end of the year, according to Pascal Saint-Amans, the OECD’s leading tax expert.

Emphasising that he was giving his personal view, Mr Saint-Amans said that the controversial proposal, strongly opposed by the Republic, could get agreement by EU countries as a short-term, time-limited measure while other longer-term proposals are being considered.

The European Commission has proposed that the tax be levied at a rate of 3 per cent on the revenues of big digital players such as Facebook and Google with a global annual turnover of €750 million and annual EU revenue of at least €50 million, The tax would, under the proposal, be collected where sales are made and would apply to online advertising and digital marketplaces.

It is opposed by the Government, as it would involve losses to the Irish exchequer because the big players would pay more tax in markets with more consumers. The Government also fears it will lead to longer-term measures to levy more tax where sales are made, rather than booking profits where companies have their European headquarters, many of which are based here.

Mr Saint-Amans, who has led the OECD’s base erosion and profit shifting (BEPS) project, an international approach to combat tax avoidance by multinationals, said there was a big political push in the EU to introduce a temporary measure to tax the profits of digital companies such as Google and Facebook,

He said taxation of such companies had become a hot topic, in part due to increased frustration over the lack of real progress on the issue, as well as factors such as forthcoming elections in Europe.

Speaking at the PwC/Irish Times tax summit in Dublin on Thursday, the OECD’s director for tax policy and administration said that while some EU member states, in particular France, are pushing for the measure, Germany has yet to fully show its hand, while other smaller nations, including the State and Nordic counties are strongly against such moves. However while the tax must be supported by all member states, Mr Saint-Amans believes there is chance that such agreement will be reached.

Mr Saint-Amans said that while Ireland has been increasingly proactive in introducing measures to prevent multinational tax avoidance, it still carries “reputational baggage.” Ireland has introduced many good measures, he said, though he said the long phasing out period for the double Irish tax relief – which remains available for those already using it until 2020 – did some damage to the State’s reputation.

In the long term, he said he did not believe that here will be a special set of taxation rules for digital companies because it would be too difficult to ring fence.

He said the debate triggered by the digitisation of the economy will go beyond this issue because of a “fundamental shift” from the US in terms of its traditional thinking on tax reform, with consequences that cannot be measured as yet.

Mr Saint-Amans said BEPS was progressing well with 84 countries having now signed the multilateral convention, the latest of which, Saudi Arabia, signed it on Wednesday

“We are in the midst of full implementation of the BEPS package,” he said. It has moved from commitment to legal implementation and is now in the hands of the tax authorities.”