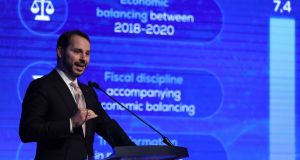 Turkey’s finance minister has lowered the country’s economic growth targets and promised to slash public spending by nearly $10 billion (€8.5 billion) as the country seeks to find a path out of a currency crisis.

Berat Albayrak, who was placed in charge of the economy by his father-in-law, President Recep Tayyip Erdogan, said GDP growth would be 3.8 per cent in 2018 and 2.3 per cent in 2019, both cut from previous forecasts of 5.5 per cent.

Seeking to allay concerns among international investors that public spending has fuelled inflation that almost hit 18 per cent in August, Mr Albayrak promised to cut showpiece infrastructure projects that have accounted for a large proportion of government expenditure.

“Some of the projects that have not been tendered out yet will be suspended. Mega infrastructure projects will be implemented with international financing,” he said in a presentation using English-language slides at a museum in Istanbul.

He said the budget deficit would be 1.9 per cent of GDP this year and 1.8 per cent in 2019. In an acknowledgment that inflation is likely to rise further in the months ahead, the 2018 inflation target was 20.8 per cent but Mr Albayrak said it would come down to 15.9 per cent next year.

The Turkish lira has lost 40 per cent of its value against the dollar since the start of the year as investors have become increasingly fretful about the country’s economic health.

The economic plan came a week after Turkey’s central bank won praise from some investors for raising interest rates despite Mr Erdogan’s apparent objections. On Thursday investors said they were looking for more conservative GDP forecasts and more commitment to fiscal discipline.

Alvaro Ortiz Vidal-Abarca, chief economist for Turkey at the Spanish bank BBVA, said the plan was based on “more realistic GDP and inflation assumptions”, which he said showed that the government was willing to accept “lower but more sustainable growth”.

He said the plan to cut spending was a welcome step but added that more details on plans to raise an extra TL16bn ($2.6 billion) in revenue would be welcome.

Mr Albayrak said “more sound public-private partnership practices will be implemented”, a recommendation of the IMF, and that the social insurance scheme would be revised.

He said banks would undergo “health assessment studies” to “identify [their] financial structure and asset quality”.

Investors had hoped that Thursday’s presentation would announce the creation of a “bad bank” to transfer problem loans to the state. The finance minister said that, following the health check, Turkey would take further steps if necessary.