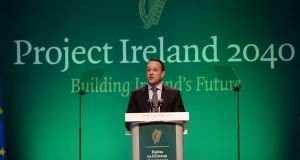 The Government’s national development plan, known Project Ireland 2040, has been described as “reckless” at a time of near full employment and with contraction costs rising towards boom-time rates.

Economist and former senator Seán Barrett told the annual conference of the Dublin Economics Workshop in Co Wexford that increasing capital expenditure “mostly on construction” at a time of full employment would undermine “the very economy that brought us there in the first place”.

While prices generally are falling by 0.4 per cent, construction costs are rising by 7.4 per cent, he said.

“So a 23.5 per cent increase in capital expenditure [which is envisaged under the NDP next year] is going to make the disparity between the high-cost construction sector and the rest of the economy worse,” Mr Barrett said.

The Government plans to spend €116 billion, mainly over the next decade, on upgrading the State’s creaking infrastructure and transitioning the Republic to a low-carbon economy.

The plan includes the long-promised metro rail link from Dublin Airport and Swords to the city centre, at a cost of €3 billion, three new hospitals for Dublin, Cork and Galway as part of the €10 billion health spend, and €22 billion on tackling climate change.

“We have a country that can’t balance its books going on a spending spree that is unprecedented in European terms,” Mr Barrett said.

He also claimed that recent criticism from the International Monetary Fund (IMF) of spending controls here had largely been “shrugged off” by the Government”.

In an assessment of public investment in Ireland, published last year, the IMF was sharply critical of the control the Department of Public Expenditure had over spending in other departments.

Also addressing the conference, Aoife O’Grady from the Department of Transport, outlined details of the department’s plan to build out and overhaul the State’s road network over the coming decade, known as Project Pluto.

She said official projections suggested there would be 300,000 more vehicle trips made in the Greater Dublin Area during the peak morning rush by 2035.

“If all those are to be made by private car, you would need 30 additional Ilac Centre car parks in the centre of Dublin,” she said.

“And the roads are already congested without any more private car trips. So the challenge is to create a transport system that can take those 300,000 trips within the existing network.” “The idea is that all those trips should go onto public transport,” she said.

Earlier Séamus Coffey, head of the State’s independent budgetary watchdog, the Irish Fiscal Advisory Council, warned that Government spending was still rising at a higher rate than tax revenue, meaning it was pursuing a marginally pro-cyclical budgetary policy, when all the advice was that it should be taking money out of the economy to prevent overheating.

1 Irish company paid €1.2m a year by collapsed Blumenthal-linked Australian restaurant
2 Should AIB compensate me for upsetting letter on arrears?
3 Hugo MacNeill steps back from Goldman Sachs role
4 Legal eagles yet to land; economy to grow 3.4% this year; and CEOs on social media
5 Tax shifts won’t drive multinationals out of Ireland - Moody’s
6 ‘I wouldn’t be a big saver. I tend to buy now and repent at leisure!’
7 Why bosses should not be afraid of speaking out on Instagram
8 Irish economy to grow by 3.4% this year, predicts EY
9 Greencoat Renewables buys Clare wind farm for €35.4m
10 Chris Johns: The Johnson administration will spend, and needs a quiet Treasury
Real news has value SUBSCRIBE