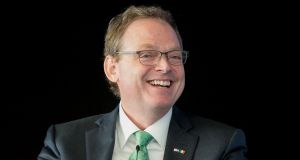 Kevin Hassett, chair of the White House Council of Economic Advisers: blames former US administrations for multinationals’ decisions to funnel their profits through the Republic. Photograph: Gareth Chaney Collins

It’s rare enough for the Republic to receive a pat on the back for its corporate tax policy these days. Sure, there may be grudging respect paid every now and then to it, but usually we’re in the firing line for anybody who wants to rally against tax havens and the like.

Given this, it was somewhat surprising to hear such fulsome praise from Reece Smyth, the chargé d’affaires at the US embassy in Dublin earlier this week.

“Essentially, if you look at Irish economic policy, the whole world has copied it,” he said during a speech at an economic conference on the US-Irish trade relationship held in Dublin.

“Ireland has been low-tax for a long time and you see corporate rates going down all across the world, and it is good economic policy,” he added.

Coming from an official representative of a political administration that has been highly critical of the State’s taxation policy in the recent past, this was high praise indeed.

Smyth was immediately followed onstage by Kevin Hassett, one of Donald Trump’s leading economic advisers. Instead of getting the boot in as he has done on previous occasions when Irish corporate tax rates are mentioned, Hassett chose to blame former US administrations for multinationals’ decisions to funnel their profits through the Republic.

“It’s not Ireland’s fault that the tax law in the US was written by someone who was taking acid,” he said.

While Hassett and Smyth were no doubt playing to the local audience, it was reassuring to hear this bluntly expressed perspective. Backhanded compliment it may be, but we’ll take it nonetheless.