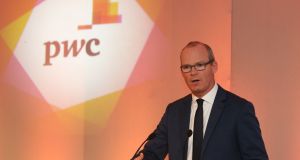 Brexit is a “damage limitation exercise” for everyone involved, and a “lose, lose, lose” situation, Tánaiste and Minister for Foreign Affairs Simon Coveney has said.

He also suggested on Thursday that Britain’s standing in the world would be diminished because of the loss of solidarity and support from EU members.

“For the EU we will undoubtedly be weakened without the British economy and the British political system advocating for globalisation, providing a bulwark against protectionism, and making sure the single market works fairly for everybody,” he told the PwC/Irish Times tax summit in Dublin on Thursday morning.

“Britain has been the champion of all these things, and the EU without Britain, in my view, is a weaker place,” he said.

“From an Irish perspective, it’s a lose too,” Mr Coveney said, noting the considerable amount of contingency planning for different eventualities that was being put in place.

As the negotiations enter a crucial final phase ahead of the UK’s planned departure in March, he said both sides needed an outcome that did not create any more uncertainty.

Mr Coveney said approximately 90 per cent of the withdrawal treaty was agreed, but the Border remained a sticking point.

He said British prime minister Theresa May was pushing for a backstop agreement on the Border.

“But what she is looking for is a UK-wide backstop as opposed to a Northern Ireland-specific backstop on customs, and that effectively means the UK being in the customs union as part of the backstop.”

Reflecting the tensions on both sides, he said certain parties were rejecting EU proposals on resolving the issue without even seeing them. “It is not a preferred approach but a fallback position,” he said.

Mr Coveney said the Republic would not sign up to a Brexit withdrawal agreement that did not include a backstop deal for the Border.

He dismissed suggestions that Ireland may be forced to bend on tax in return for the solidarity it was being shown by EU members on Brexit.“I’ve had thousands of meetings across Europe on Brexit, and there’s never been any link between the two. Brexit is a big enough issue in its own right, and the Irish issues and the Irish vulnerability and the Irish exposure is a real issue recognised across the EU as an issue that needs to be of EU concern.”

He said the solidarity that has been shown to Ireland was not some kind of quid pro quo “for us to change in some other area”.

Tax and in particular Ireland’s low-cost regime has been a source of tension between Dublin and Brussels.