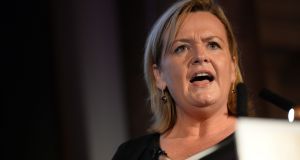 Deirdre Somers, the Irish Stock Exchange’s recently-departed chief executive, had a €5.75 million pay day last year, driven by a cash windfall and bonuses tied to the group’s sale to Euronext

Deirdre Somers, the Irish Stock Exchange’s recently-departed chief executive, had a ¤5.75 million pay day last year, driven by a cash windfall and bonuses tied to the group’s sale to Euronext. The deal, struck late last year, triggered a cash payment of €8.83 million under a so-called share appreciation rights scheme for “key management personnel”. It also led to an additional €4.66 million of bonuses and other compensation for senior staff. In the awards came to €13.5 million, according to the exchange’s 2017 results.

As Ryanair shareholders meet this morning for its agm, a European trade union group is demanding that Ryanair offer contract pilots direct employment from the beginning of 2019. It’s the latest industrial relations turbulence at the company. The British Airline Pilots’ Association, one of the first unions to sign a recognition deal with Ryanair, predicted yesterday that industrial unrest could continue at the carrier for the foreseeable future.

The Government enjoyed an unexpected €6 billion windfall between 2015 and 2018 courtesy of stronger-than-expected corporation tax receipts and a lower interest rate bill on the State’s national debt. However, Seamus Coffey, chairman of the Irish Fiscal Advisory Council has warned the reverse could easily happen in the coming years, and “ we could see a large deficit opening up very rapidly”.

An Irish-based subsidiary of the software giant Adobe plans to pay an interim dividend of $3.2 billion (¤2.7 billion) to its US parent this year. The move coincides with the tax reform package introduced under US president Donald Trump, which included a one-time special rate of 15.5 per cent on the repatriation to the US of profits earned abroad.

The construction of new apartment buildings aimed at the rental market will play a “crucial role” in easing the housing crisis but it may not necessarily ease rents, according to a new report. Separately a survey by PwC of Irish business leaders found nearly half regarded the lack of affordable housing as a key impediment to expanding their businesses.

In the Net Results column this week, Ciara O’Brien warns of the growth of cameras filming our every move, particularly so-called dashcams in cars. “If you feel like you’re being watched, you probably are,” she says.