Sean Dunne: ‘I have been treated like Pablo Escobar’

Seen & Heard: Bankrupt developer also claims he has no hidden assets or income 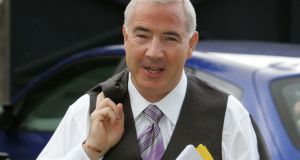 The Sunday Business Post has an exclusive interview with Irish developer Sean Dunne, who claims the State has pursued him as if he was “the Ace of Spades or Pablo Escobar. when the truth is, I have no hidden assets or income”.

The bankrupt businessman also defended his reputation against various allegations made by his bankruptcy trustee, which last week led to Dunne being described by a judge as “deeply dishonest”.

The reference to the Ace of Spades by Dunne refers to the Saddam Hussein playing cards given out to US soldiers searching for high-ranking Iraqis after the 2003 invasion.

Ms Justice Caroline Costello extended Dunne’s Irish bankruptcy to 12 years last week over what she described as his “wilful and deliberate” failure to co-operate with the trustee administering his bankruptcy. The extension will bring him to the age of 74. Dunne plans to appeal the decision.

Granahan McCourt, the final bidder in the Government’s €1 billion broadband process, was fighting a €19 million lawsuit over the sale of Enet shares when its owner and current chairman hosted Minister for Communications Denis Naughten and his officials at a New York dinner, according to The Sunday Times.

Fianna Fáil, the Social Democrats and the Labour Party are demanding Naughten “urgently” answer questions in the Dáil about the probity of his dinner meeting with David McCourt, the chairman of Enet and Granahan McCourt. It was held at the Club 21 venue in Manhattan last July.

The paper reports that it has now emerged that Cube Infrastructure Managers (CIM), a Luxembourg investment group, is suing Granahan McCourt for alleged breach of contract related to last year’s sale by Oak Hill, a US firm, of its 47 per cent stake in Enet. The Sunday Business Post also had a report on the same story.

According to The Sunday Business Post, Minister for Finance Paschal Donohoe will have up to €700 million extra for new measures in Tuesday’s budget. The additional money will be funded by hiking hospitality VAT to 13.5 per cent plus a 50 cent increase in cigarettes. An increase of €10 in the carbon tax is also being considered, the paper said.

At the weekend, Taoiseach Leo Varadkar confirmed the Government would deliver a tax-cuts package for people on modest incomes of between €40,000 and €50,000. The Government is also expected to use a substantial portion of an additional €1 billion in corporation tax receipts to help pay for health overspending this year. Corporate tax receipts are expected to hit €9.5 billion for this year.

According to The Sunday Times, Cobas Asset Management, a Spanish fund manager, is garnering support for its opposition to Aryzta’s proposed €800 million rights issue. Cobas is the Swiss-Irish baker’s biggest shareholder with a 14.5 per cent stake and has been mandated to speak for the a further 5 per cent of the company’s investor base.

The fund is opposed to the Aryzta’s fundraising, which it says will be “highly dilutive” to existing shareholders. Aryzta sees the raising of €800 million in new capital as vital to shoring up the business, which has been struggling to halt a slide in its US subsidiary.