Keeping over-55s in workforce could boost economy by €27bn 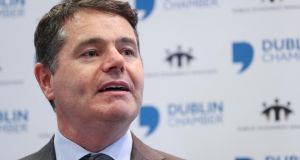 The State could boost the economy’s long-term GDP by 9.2 per cent, or about €27 billion, by encouraging and supporting over-55s to continue working, according to research by PwC.

Extending people’s working lives to reflect the ageing of their populations could release “massive untapped value” for their economies to the tune of $3.5 trillion across the OECD as a whole, the research said.

Current employment rates for workers aged 55-64 vary dramatically across the OECD, from 84 per cent in Iceland and 78 per cent in New Zealand to 38 per cent in Greece and 34 per cent in Turkey. In the Republic, the rate is 56.5 per cent.

Increasing the over-55 employment rate to New Zealand levels could deliver a long-term economic boost worth about $815 billion in the US, $406 billion in France, $123 billion in Japan and €27 billion for Ireland, the research noted.

PwC chief economist John Hawksworth said older people should be “encouraged” to remain in the workforce.

“Of course, it’s good news that we’re living longer,” he said. “But an ageing population is already putting significant financial pressure on health, social care and pension systems, and this will only increase over time.

“To help offset these higher costs, we think older workers should be encouraged and supported to remain in the workforce for longer.

“This would increase GDP, consumer spending power and tax revenues, while also helping to improve the health and wellbeing of older people by keeping them mentally and physically active.”

Mr Hawksworth noted measures in the last budget to incentivise later retirement in the public sector. “It will be interesting to see whether similar legislation is enacted in relation to private sector workers,” he said.

“The study also shows that flexible working and partial retirement options can pay dividends for employers, as can redesign of factories, offices and roles to meet the changing needs and preferences of older workers,” he said.