Canada and US negotiators reach deal to revamp Nafta 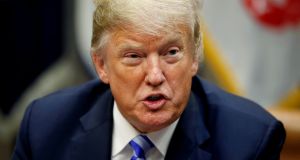 Trade issue has been hanging over the economies of all three countries ever since Donald Trump took office.

Canada has agreed to join a US deal with Mexico to revamp Nafta, ending months of uncertainty over trade in North America that had been hanging over the economies of all three countries ever since Donald Trump took office in the White House.

Officials from the US and Canada said the agreement had been reached late on Sunday, just hours before a deadline for the US and Mexico to send the text of the deal to congress.

The new trilateral pact is to be called the United States-Mexico-Canada Agreement, they said.

“USMCA will give our workers, farmers, ranchers and businesses a high-standard trade agreement that will result in freer markets, fairer trade and robust economic growth in our region,” Robert Lighthizer, US trade representative, and Chrystia Freeland, Canada’s foreign minister, said in a joint statement.

“It will strengthen the middle class, and create good, well-paying jobs and new opportunities for the nearly half billion people who call North America home.”

The US-Canada agreement follows weeks of tensions between Donald Trump, the US president, and the Canadian negotiating team, as they hashed out a compromise over measures relating to the dairy sector, dispute settlement mechanisms, car tariffs, and cultural provisions.

A full Nafta deal involving Canada and Mexico completes a series of efforts by the Trump administration to soothe trade relations with traditional US strategic allies, while ratcheting up commercial tensions with China. The US has imposed levies on $250 billion of Chinese goods, or half of all imports from the country.

Last week, the US agreed to begin bilateral trade talks with Japan, and did the same with the EU in late July. Still, the Trump administration continues to study the possible imposition of tariffs on cars on national security grounds, and has threatened to pull the US out of the WTO unless it is reformed.

Senior Trump administration officials said Sunday’s deal included “a host of provisions” that would “rebalance” trade with all three countries. Mr Trump had been a fierce critic of Nafta, the 1994 pact signed by former president Bill Clinton, on the 2016 election campaign and since becoming president.

Senior administration officials said the US had secured greater access to Canada’s dairy market, which benefits from hefty protections under the “supply management” scheme, as one of their big wins in the deal.

However, Canada was able to retain a dispute settlement system used by its lumber industry to challenge US countervailing and anti-dumping duties, in a win for Ottawa.

Although the details were still unclear, US administration officials said an “accommodation” had been reached with Canada and Mexico that would prevent US tariffs on their cars to be levied on existing levels of production, if they were ever imposed. “It’s a good day for Canada,” said Justin Trudeau, Canada’s prime minister.

“The door to trade fragmentation in the region has been closed. Nafta 2 will give certainty and stability to trade in Mexico and its partners in North America?.?.?.?Congratulations to all.”

Roberto Gil Zuarth, a former Mexican interior undersecretary, tweeted: “We have a new Nafta. Good news for the country. The outgoing administration has achieved a positive result. The income one avoids a headache.”

The fact that Canada joined the US deal with Mexico improves its chances of securing congressional approval in America, though it does not guarantee its passage. Many lawmakers and influential business lobby groups had strenuously campaigned to make sure Canada was not left out, and were relieved at the news of an agreement.

The Business Roundtable, which represents the largest US companies, said it was “encouraged” that the administration had reached a deal that maintained “its trilateral structure that is critical for North American supply chains”. But the BRT said it would still have to “assess” the terms of the deal.

Trump administration officials said the trilateral deal, due to be signed by Mr Trump, Mr Trudeau, and Enrique Peña Nieto, the outgoing Mexican president, on November 30th, would be voted on in 2019, with a new Congress.

Polls suggest that lawmakers from the Democratic party may win control of the House of Representatives, which could complicate the deal’s prospects on Capitol Hill.

A deal between the US and Canada appeared to be slipping out of reach as recently as last week, after Mr Trump lashed out at Ottawa and its negotiators during a long press conference in New York.

But even at that low point, Ms Freeland and Mr Lighthizer remained in communication and worked towards making the final compromises. – Copyright The Financial Times Limited 2018