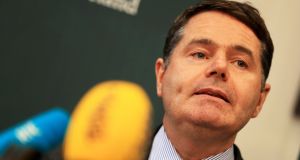 Minister for Finance Paschal Donohoe: announced a change to his budget target for next year. Photograph: Donall Farmer

Significant extra revenues will have to be raised in Budget 2019 to allow for spending increases and tax cuts, pre-budget figures have confirmed. The White Paper on Receipts and Expenditure, published on Saturday morning, shows that before the Minister for Finance stands up on Budget day, the budget figures will be in surplus to the tune of €640 million.

With the Minister saying he will aim to balance the budget for 2019 , he thus has some leeeway for new measures. But he will still have to raise significant sums in new revenues to pay for budget-day announcements on increases in investment spending and social welfare and cuts to income tax and USC.

There are always late changes to tax and spending forecasts in the run-up to the budget each year, which is no surprise with massive and complex spending and tax budgets involved. But ahead of next Tuesday’s budget, two big items have had an impact – one on spending and one on revenue. This has affected this year’s figures and meant decisions had to be made about the forecasts underlying next year’s budget.

Corporation tax has been a rapidly growing source of revenue for the exchequer in recent years.. However, a huge late inflow of tax revenue from this source this year will have a major impact on the out-turn for 2018. Minister for Finance Paschal Donohue announced yesterday that corporation tax this year was now likely to come in a full €1 billion ahead of earlier forecasts, bringing it to €9.6 billion, over twice its level just four years ago.

While corporation taxes were already running €300 million ahead of forecast, the Revenue Commissioners now expect further additional revenue of €700 million to flow in before the end of the year. While the Minister gave no details, it appears this relates to payments from one company linked to a change in international accounting rules, which affects the timing of tax payments from many firms. The measures are understood to particularly affect the software sector.

The rule change involved is known as International Financial Reporting Standard (IFRS) 15 . It came into force in January 2018 and affects when companies must recognise revenues, for example relating to customer contracts of licences.

Given the scale of the money involved, the payment must be coming from one of the 10 major corporation taxpayers, who account for almost €4 in every €10 in revenue from this corporation tax heading.

This additional money for 2018 will boost overall tax revenues.It is thus a significant plus for this year’s figures and will thus help to pay for a €700 million overrun in the health budget, confirmed yesterday by the Minister. The big rise in corporation tax and general buoyancy in tax revenue is a key factor offsetting the overrun in health. Underspending in some other departments and strong PRSI receipts also helped.

The White Paper on Receipts and Expenditure, published on Saturday morning, estimates that government borrowing this year, using the EU measure, will be just 0.1 per cent of GDP, compared to an earlier forecast of 0.2 per cent..

The Government then had a call to make in terms of the 2019 budget. While the late surge in corporation tax helped to stop this year’s numbers running off course, it would be dangerous to assume that the same level of tax was going to recur next year, given the once-off nature of much of the payment. It is not good policy to pay for recurring costs with once-off revenues. The Revenue Commissioners advised the Minister to assume that just €300 million of the additional €1 billion is likely to recur next year. This means corporation tax next year is now forecast to come in a bit below this year’s level – at €9.48 billion –but still ahead of what the department would have original pencilled in for 2019.

The Minister also announced a change to his budget target for next year. Previously the Government had said it would aim for a deficit of 0.1 per cent of GDP next year, about €350 million in cash terms. Now the Minister has said he will aim to balance the budget next year, meaning revenues will be equal to spending for the first time since before the crash. He has said he will do this while also keeping to his commitment to start a rainy-day fund, with €500 million coming from next year’s budget sums to do so.

The pre-budget White Paper shows that before he makes any changes in the Budget, on current estimates the Budget would be in surplus to the tune of 0.2 per cent of GDP next year, or around €640 million in cash terms. The budget will plan to spend this surplus on tax and spending measures and end in a balanced position for 2019. So the Minister’s room for manoeuvre in the Budget is tight enough. The numbers will change again on budget day as final adjustments are made.The net sum available on Budget day may well be close to the €800 million which has been indicated since the summer.

But Minister Donohoe will definitely need significant revenue raising measures on budget day to fund his Budget package on housing, welfare, income tax and USC. If he raised €800 million in new revenues, for example, this would allow for a packagae of €1.5 to €1.6 billion.

Speaking at a press conference, the Minister said this decision to aim for a balanced budget was taken to leave a bit more leeway due to the risks the economy is facing, notably the danger that Brexit talks could end badly. The impact of Brexit has been taken into account in the existing Government growth forecasts, but not the economic jolt that could come from a failure to finalise a withdrawal agreement between the EU and UK, meaning the UK would leave next March with no transition measures coming into play.

The budget will still be based on fairly upbeat growth forecasts. The Department of Finance recently upped its 2019 GDP growth estimate from 4 per cent to 4.25 per cent and this has knocked on to tax revenues next year, expected to rise by more than 4 per cent to €57.779 billion. Next Tuesday the final pieces on the puzzle will be slotted in.