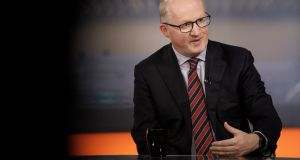 The bonuses foreseen by Philip Lane would fall if a lender’s profits declined. Photograph: Bloomberg

Central Bank governor Philip Lane has said that “there’s a good case” to be made for bankers receiving performance-related pay if it can be adapted when circumstances change.

This would see bonuses falling if a lender’s profits decline, or being clawed back in the event of weaker-than-expected performance or misconduct by a firm or individuals.

Prof Lane said that it is up to the Oireachtas to consider the pros and cons of reintroducing bonuses, which are effectively banned across bailed-out banks by virtue of an effective 89 per cent special tax introduced in 2011, as the Government awaits a report on remuneration across the sector.

Lawmakers must decide whether it is more acceptable to maintain a €500,000 executive pay cap and ban on bonuses for State-controlled lenders, even if some potential candidates for senior positions are put off as they can be more highly remunerated elsewhere.

“You do need to think about it in terms of the pros and cons,” Prof Lane told members of the Oireachtas finance committee at a hearing on Thursday.

The Irish Times reported earlier this week that the Minister for Finance Paschal Donohoe has hired Korn Ferry, one of the world’s largest headhunting firms, to assess pay across the industry a decade after Irish taxpayers were forced to guarantee the financial system, resulting in €64 billion of capital injections into the sector.

Meanwhile, the governor warned that economic forecasting models that the Central Bank and others rely on to predict the impact of the United Kingdom exiting the European Union “understate the negatives” of a disorderly Brexit, as they do not fully capture the likely financial turmoil from such a scenario.

“Unless there’s very rapid and very clear progress within this month, or within November – if it’s not evident by then – then we will be witnessing volatility until the final answer is there,” he said.

British prime minister Theresa May is racing to come up with an acceptable Brexit plan ahead of addressing other EU leaders at a working dinner on October 17th, a day ahead of a European Council summit, which EU president Donald Tusk has billed as the “moment of truth” for negotiations.

Prof Lane said that he “would not take excessive comfort from any quantitative numbers” on the economic impact of Brexit contained in the Central Bank’s upcoming quarterly bulletin, as the models “typically will underestimate” the impact of turmoil in financial markets, including currencies, bonds and equities.

Volatility may arise even if the outcome of Brexit next March is ultimately not as bad as feared.