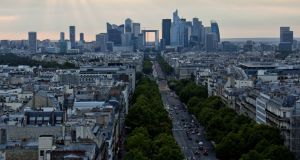 Bringing back tax relief on rents in next Tuesday’s budget could offer hard pressed tenants as much as a month’s free rent a year and ease their burden at a time of record rents, one of the big professional services company’s has argued. EY also wants to see a €1,200 tax credit extended to all parents to alleviate the cost of childcare.

Paris is emerging as the favoured financial trading hub for continental Europe, as some of the world’s biggest banks and asset managers prepare for life after Brexit by steering their EU operations away from London to the French capital.

Meanwhile Brexit is taking its toll on Irish consumer confidence. New figures show it dropped sharply to a 21-month low in September as Brexit anxiety triggered worries about the broader economic outlook. According to KBC Bank Ireland’s chief economist Austin Hughes, “From a consumer perspective, the most worrisome aspect is the tension between a shortening timeframe and repeated setbacks around the negotiations.”

In his column, Chris Johnsadvises the Government to scrap plans for next week’s Budget and sit tight until we have a better idea of what Brexit might bring in terms of turmoil to the economy. “Beyond vague generalisations - something big is coming our way - it is an extraordinary fact that we cannot say much else.” That’s why he reckons the Taoiseach and Minister for Finance should let the current fiscal parameters - spending and tax - run as they are, and when we know more about Brexit “then react as best we can”.

It comes as we mark the 10th anniversary of another seismic event to hit our economy, the banking crash. Peter Hamilton looks at what happened to some of the main players in the crisis and where they are now.

BMW’s Irish dealers are to invest €37 million in their businesses and create 120 new jobs after a review by the German premium car company of its network here.

Finally, an Irish gift hamper company expects its business to return to pre-recession levels this year on the back of increased corporate orders in advance of Christmas. For some, it seems, the good days are back.