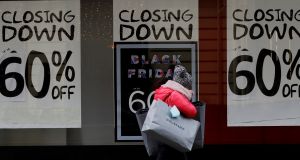 Mike Ashley: “The mainstream high street as we think about it today is already dead. Dead. They can’t survive. Their patient has died.”

Ryanair is challenging an Irish tax law that is forcing it to levy income tax on employees who don’t live here. The law that requires the airline to tax the employees, because they work on Irish registered aircraft, is preventing the airline from finalising agreements with trade unions that grounded Ryanair flights earlier this year. Arising from the strikes Ryanair began dealing with a number of European trade unions and is recognising that crew members based at its more than 85 bases around the continent can operate according to local labour laws and have local contracts.

Retail entrepreneur Mike Ashley delivered an extraordinary performance before a House of Commons committee hearing on the future of the UK’s High street, and physical retailers across the western world. The chief executive of Sports Direct made it clear he wasn’t going to accept the role of pantomime villain and turned the discussions to the problems facing all brick-and-mortar retailers these days: rents and online rivals. The former he described as “prehistoric” while he called for a 20 per cent tax on online sales to fight back against “the web boys”.

Staying with the world of retail, shares in clothing outlet Ted Baker’s hit a three-year low after a petition emerged calling on the luxury clothing retailer to “end harassment” and accusing its founder of enforcing a “hugging” culture. Founder and chief executive Ray Kelvin is accused of forcing hugging on colleagues, as well as asking young female staff to “sit on his knee, cuddle him, or let him massage their ears”. While the company denied that hugging was “not insisted upon”, it promised to investigate the claims.

The five-star Heritage Hotel in Killenard, Co Laois has been sold to FBD for close to €9 million, representing a tidy profit for two US-based investors who acquired the hotel about four years ago for more than its then asking price of €5.5 million. One of the investors, Adrian Carmack, is a co-founder of the firm that created ground-breaking game franchises Doom and Quake.

The head of the MI6, Alex Younger, signalled security concerns over the Chinese telecoms group Huawei in a rare speech that underlined the threat faced by Britain and its allies from Beijing’s growing dominance of emerging technologies. Mr Younger said the UK had to make “some decisions” on Huawei after close intelligence partners such as the US, New Zealand and Australia banned them from future 5G mobile networks.

People remain slow to trust pension promises, a new OECD report has found. Low investment returns on pension savings, less stable employment structures, low economic growth and the fact that people are living longer have all eroded belief that pensions “will deliver on their promises once workers reach retirement age”, the OECD Pensions Outlook 2018 reports. Cantillon argues the report reinforces the case for introducing a well-designed auto-enrolment regime as soon as possible.

Fiona continues to deliver her prize-winning financial analysis today with a feature on the options for savers tired of the small returns on offer and willing to take a risk with their investments.

Meanwhile, Proinsias O’Mahony explains why investors love family-owned companies, despite the tight grip on control and its implications for corporate governance.

Finally, in her column this week, award-winning journalist Laura Slattery writes that while the toy store aisles – the ones that haven’t been taken down as a consequence of Amazon’s ascendancy – are dominated by TV and film tie-ins, not everyone chasing lucrative revenue from merchandising makes it as far as the shelves. “Netflix is still only warming up when it comes to exploiting the licensing potential of its own commissions.”