Interest rates will rise again. But when? 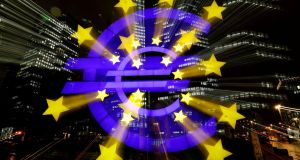 The euro sign outside the former HQ of the ECB in Frankfurt. Central Bank governor Philip Lane says it is too soon to discuss the timing of any interest rate increase. Photograph: Kai Pfaffenbach/Reuters

Can I afford to buy my own home? Low housing supply – and its inflationary effect on Irish house prices – has lately been the first explanation for why the answer for many people is “not for the foreseeable”. The deposit rules laid down by the Central Bank, as part of mortgage restrictions designed to ensure prudent lending, have also contributed to a feeling of hopelessness for some.

Prevailing interest rates are another key factor in affordability, or the lack thereof. While mortgage rates here are the highest in Europe, the European Central Bank (ECB) rate to which the Irish banks’ cost of borrowing is linked remains at its historic low. The downside risk to Irish borrowers, would-be borrowers and the economy as a whole is that interest rates will, at some point, start going up.

On Wednesday, Central Bank governor Philip Lane, a member of the ECB’s governing council, said it remained too soon to discuss the timing of any interest rate increase.

But he also played down a recent loss of momentum in the euro-zone economy (which would mitigate against a rate increase), noting that it was in large part a reversal of better-than-expected growth in 2017. It was important “not to be overdramatic” about it.

“All the data clearly shows that the European economy continues to grow,” he said, going on to note that “employment is falling into that zone” where there is upward pressure on wages (which would increase the case for a rate rise).

The ECB’s guidance to date has been that interest rates will remain where they are “at least through the summer of 2019”. After that, it is not possible to forecast what will happen with any great certainty, Lane said.

Earlier this month, the Paris-based Organisation for Economic Co-operation and Development warned that high levels of indebtedness in the Irish economy left it exposed to rising interest rates.

This, as Lane said yesterday and indicated he would say again in a speech today, has long been the story of the Irish economy: volatile, vulnerable to risks and at the mercy of events outside its control. Urban renters may know the feeling.