Signs of readiness to lower deficit target beginning to open 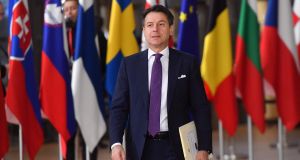 Italy’s populist government failed to thrash out a new deficit target for the European Union in late night talks but cracks are starting to show in its battle with the bloc over spending.

Prime minister Giuseppe Conte and his deputies Matteo Salvini and Luigi Di Maio insisted in a joint statement on Monday that the budget issue is “not a question of decimal points.” Markets have jumped on every word for signs of any readiness to lower a disputed 2.4 per cent deficit target for next year.

And signs of an opening are growing even as the government continues to stand behind costly election pledges including pension reform, a citizen’s income for the poor and safeguarding people’s savings. “The objective of the government is to relaunch growth and development,” their statement said.

Still, the three leaders agreed to await “technical reports” that would help “quantify the real costs” of the budget measures before pursuing talks with the European Commission.

The government has yet to decide whether and how to cut - or delay in order to save funds - the election pledges behind the populists’ spending spree. At stake is an infringement procedure which may lead the EU to impose fines on Italy, stacked with a mountain of debt.

Mr Conte’s room for manoeuvre is limited by tensions between the two euroskeptic leaders - Mr Salvini of the anti-migration League and Mr Di Maio of the anti-establishment Five Star Movement. Theirs is a delicate power balance and each is reluctant to cede ground to the other.

According to Ansa, the government is considering postponing the citizen’s income to June at the latest - a concession on Mr Di Maio’s part and shrinking the number of beneficiaries of the pension reform - a concession from Mr Salvini. It cites unnamed Five Star officials.

Each deputy premier is more than willing to see his counterpart’s promises trimmed, according to government officials. Mr Salvini, whose electoral stronghold is the business-rich north, is lukewarm on the citizen’s income for the poor which Mr Di Maio campaigns for. Similarly, Mr Di Maio is not as keen as Mr Salvini on the League’s pledges of tax cuts.

Italian assets rallied earlier Monday on the government’s openness to review its deficit target. Local stocks surged the most since June, while the yield on two-year debt securities touched the lowest level in almost two months. Still, some scepticism in markets remained, after weeks of insistence by government leaders that they would not back down.

Dovetailing with the budget wrangle is a judicial verdict from Strasbourg, France, which could affect how long the coalition remains in power. The European Court of Human Rights will rule Tuesday morning on an appeal by ex-premier Silvio Berlusconi against a ban on his running for public office.

If Mr Berlusconi, 82, wins his appeal, it could strengthen his hand in trying to persuade Mr Salvini to ditch Five Star and return to a centre-right alliance which has seen the League and Mr Berlusconi’s Forza Italia govern together. Mr Berlusconi lost his seat in the Senate because of a 2012 conviction for tax fraud. He has denied wrongdoing.

From Brussels, Mr Draghi said he’s “always been confident” that Italy can reach a deal with the EU on the budget, though he also made a veiled admonition to his home country.

“Trust hinges on two features: one is respect of the rules, the second one is convergence,” Mr Draghi said. “If countries, no matter why, diverge, they become inherently weaker, and therefore it’s very difficult to trust them.”

Seen from Brussels, even a new target at around 2.2 per cent may be too little, too late.

The Commission has long made clear to Italy that it not only wants a deficit no higher than 2 per cent, it also wants structural rather than one-off reforms to boost the country’s sluggish economic growth, according to an Italian official who declined to be named. – Bloomberg