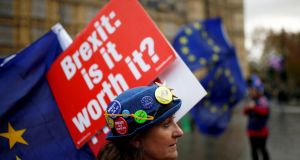 Anti-Brexit demonstrators in London: To what extent is a House of Commons defeat of Theresa May’s plan already “priced in” by sterling traders? Photograph: Henry Nicholls

Irish businesses face two distinct risks as the Brexit political turmoil appears to build to some kind of reckoning. One is whatever happens next March, when the UK leaves, with the possibilities still involving two extremes – a move into the transition period, following an acceptance of the withdrawal agreement at one end; or a hard no-deal Brexit at the other. Indeed some even argue that a second referendum could be in prospect.

But whatever about 2019, challenges may also await in the very short term. Sterling has started to trend lower on the foreign exchange markets and could be vulnerable in the weeks ahead, depending on what happens in Westminster. On Monday, the UK currency was trading over 89p sterling against the euro, close to the top of its range over the years, which Bloomberg figures show has been from 86.21p to just under 91p. Previous analysis has shown that moving over 90p causes competitiveness problems for significant numbers of Irish exporters.

Sterling will be an interesting bellwether of the political mood over the next week. On what might be called the mainstream analysis, a heavy loss for Theresa May in the vote, due next Tuesday, could kill off any chance of her bringing the agreement back for a second vote. The resulting uncertainty could hurt sterling, particularly as it would be seen as increasing the risk of a no-deal exit, with all the cost that entailed.

The currency market is a fickle beast, of course. What we don’t know is the extent to which a House of Commons defeat is already “priced in” by traders and how they would react to the uncertainty it would create. If a heavy defeat looks certain, sterling could rack up further losses in advance of the vote. Traders do not have any special insight into what happens next. Nonetheless, the bigger the political mess, the more the risks to the currency.

Were sterling to break convincingly through the 90p barrier, it could also raise calls for the Government here to step in and assist, above and beyond what is already available. The Government is laying its plans on the basis of what happens after next March, but the essence of currency markets is that traders try to anticipate events, rather than wait for them to happen.