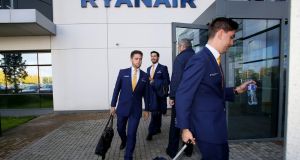 Ryanair is challenging an Irish tax law that is forcing it to levy income tax on employees who don’t live here.

The law that requires the airline to tax the employees, because they work on Irish-registered aircraft, is preventing the airline from finalising agreements with trade unions that grounded Ryanair flights earlier this year.

Arising from the strikes, Ryanair began dealing with a number of European trade unions and is recognising that crew members based at its more than 85 bases around the continent can operate according to local labour laws and have local contracts.

An application to have the matter entered into the Commercial Court list was made by Martin Hayden SC on Monday. However, Suzanne Kingston said the State would be opposing entry into the fast-track court.

The matter was adjourned for two weeks to allow the Department of Finance and the Revenue Commissioners draft affidavits.

Ryanair has asked the Minister for Finance, Pascal Donohue, to amend the law, and has asked the Revenue to grant it an exclusion from the provision, but has not been successful.

The airline says that it is collecting about €5 million a month for the exchequer in income tax from crew members resident abroad, and that this is creating substantial difficulties for these crew members as well as creating competition issues for the airline.

It wants to argue that the Irish provision is creating effects that are contrary to a number of European treaties and provisions.

Up to 2012, Ireland collected income tax and social insurance payments from people who worked on Irish-registered aircraft. Since then it has collected only income tax.

Crew members from these states end up paying high rates of both income tax and social insurance, meaning that their take-home pay is substantially less than their counterparts working for other airlines.

In the case of staff based in Romania, according to the airline, the total take from the employees’ income is in the region of 80 per cent.

The Irish tax rule is preventing Italian crew members from accessing certain allowances that exist in that jurisdiction for employees paying income tax, the airline is also arguing.

Also, the staff are hitting the threshold to higher rates of income tax earlier in Ireland than would be the case in the countries where they are based. They are also paying the Universal Social Charge.

Because of the difficulties created by the fact that crews are paying income tax here while based elsewhere, employees are coming out with less after-tax pay than is the case for employees working for local airlines. This in turn is forcing Ryanair to pay more to keep staff, and these extra costs are being passed on to consumers.

One of the airline’s concerns is that the inability to agree with local crews that they will pay income tax locally is preventing the finalisation of agreements on local contracts, which was at the heart of the recent industrial action.

The airline wants to ask the court to immediately refer the matters raised to the European Court of Justice in Luxembourg, which rules on matters concerning EU law.

It also wants the court to order the Revenue Commissioners to use its powers to grant an exclusion order to Ryanair in relation to section 127(b) of the tax code, which governs the taxation of staff working on Irish-registered aircraft.