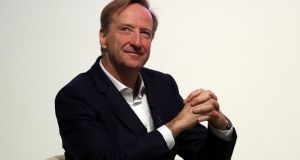 Alex Younger, chief of the Secret Intelligence Service – known as MI6 – at the University of St Andrews on Monday in Scotland. Photograph: Andrew Milligan/Getty Images

The head of the UK’s secret service, Alex Younger, signalled security concerns over the Chinese telecoms group Huawei in a rare speech that underlined the threat faced by Britain and its allies from Beijing’s growing dominance of emerging technologies.

Speaking to an audience of students at the University of St Andrews, where he studied three decades ago, Mr Younger said the UK had to make “some decisions” on Huawei after close intelligence partners such as the US, New Zealand and Australia banned them from future 5G mobile networks.

“We need to decide the extent to which we are going to be comfortable with Chinese ownership of these technologies and these platforms in an environment where some of our allies have taken a very definite position,” said Mr Younger.

The UK and Germany are growing increasingly wary of Huawei after increasing pressure from the US. Currently Huawei equipment used in the UK, some of which is embedded in the heart of the country’s telecoms network, is tested by a special laboratory overseen by intelligence chiefs from the National Cyber Security Centre, part of digital spying agency GCHQ.

However Mr Younger said the onset of 5G would make it harder to monitor Huawei kit, a threat made even more challenging by China’s “legal and ethical framework” and the rapid shift in global power, politics and money to Asia.

“In China they have a different legal and ethical framework,” added Mr Younger. “They are able to use and manipulate data sets on a scale that we can only dream of.”

Mr Younger said the growing threat from cyberattacks launched by hostile states like China, Russia and North Korea was changing the way MI6, an organisation built on old fashioned human spycraft, was operating. “We are shifting our focus to the nexus between humans and technology,” he said.

In only his second speech since becoming the chief of MI6 in 2014, Mr Younger tackled a wide range of international security issues including Russia’s increasingly malign activities and the murder of Saudi Arabian journalist and dissident Jamal Khashoggi.

He said Russia was in a “perpetual state of confrontation” with the UK and warned the Kremlin not to underestimate Britain’s determination to fight attempts to subvert its way of life.

“The conclusion they have arrived at is they should apply their capabilities across the whole spectrum to...our institutions and our partnerships,” he said.

“Our intention is for the Russian state to conclude that whatever benefits it thinks it is accruing from this activity, they are not worth the risk.”

Mr Younger did not confirm if Mr Skripal, a former GRU colonel who came to Britain as part of a spy swap between the US and Russia in 2010, had been an MI6 agent. But he said the UK would not repeat the mistake of assuming Russia would keep its word on espionage exchanges.

“Mr Skripal came to the UK in an American brokered exchange having been pardoned by the president of Russia and to the extent we assumed that had meaning, that is not an assumption that we will make again,” he said.

Mr Younger also said he was “perplexed” by the case of British academic Matthew Hedges, who was accused by the UAEs of being an MI6 spy, but pardoned last week after pressure from the UK.

“We don’t understand how Emirati partners came to the conclusions they came to. And they are important partners of ours so there are some frank conversations ahead,” he said.

On the murder of Mr Khashoggi, Mr Younger would not be drawn on whether he had seen intelligence from the US evidence that pointed to the direct involvement of the kingdom’s de facto ruler, Crown Prince Mohammed bin Salman. But he said: “It was an appalling attack, shocking. We have made it very clear to the Saudis that we expect to see a transparent and effective investigation.”