Increase in orders for computer and electronic products propels rebound 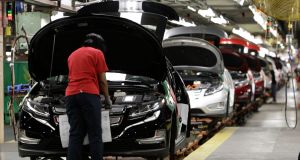 US manufacturers picked up the pace of hiring in November, as an index tracking employment was up 1.6 per cent at 58.4. Photograph: Paul Sancya/AP

US factory activity grew in November as new orders rebounded from an 18-month low, according to a closely watched survey.

The Institute for Supply Management said Monday its index tracking manufacturing activity rose 1.6 per cent to 59.3 last month from 57.7 in October. Economists polled by Thomson Reuters expected only a slight increase to 57.8.

A reading above 50 indicates growth in the manufacturing sector.

Manufacturing activity slowed during the prior two months, but a strong November for new orders helped snap that losing streak. The ISM new-orders index hit 62.1, up 4.7 per cent. In October, new orders dipped below 60 for the first time since April 2017.

The latest reading on America’s manufacturing sector comes as US president Donald Trump and Chinese president Xi Jinping seek to revive trade negotiations. Mr Trump and Mr Jinping reached a truce in their trade spat over the weekend, with the US agreeing to hold fire on new tariffs and China agreeing to purchase a range of US goods and discuss its economic policies.

Despite trade tensions, the US economy has grown at a healthy clip this year. Gross domestic product increased at an annual rate of 3.5 per cent in the third quarter, according to the US commerce department’s second reading released last week. The economy grew 4.2 per cent in the prior quarter, the fastest pace in nearly four years.

Manufacturers picked up the pace of hiring, as an index tracking employment was up 1.6 per cent at 58.4.

However, costlier raw materials continued to pressure pricing. ISM said its prices index slipped to 60.7, down 10.9 per cent month to month. Respondents to the survey noted that tariffs on imported steel and aluminium have increased costs. – Copyright The Financial Times Limited 2018