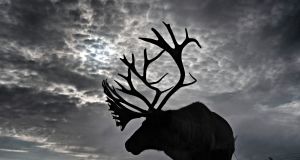 No sleighs to drive: A deer from a rent-a-reindeer business in northeast England where bookings have plunged this Christmas season. Photograph: Owen Humphreys/PA

Image of the week: Forecast for reindeer

In the bright, magical world of Dublin non-essential retail earlier this week (before the mass shutterings on Wednesday), the strains of Rudolph the Red-Nosed Reindeer merrily received an October airing over one sound system, as well they might. We won’t be hearing or groaning at its likes again until Nphet says it’s okay. Meanwhile, over in Cold Hesledon, Co Durham in the northeast of England, a chill wind has blown through the local rent-a-reindeer business, where a herd of some 110 reindeer normally despatched to shopping centres, schools and winter wonderlands is this year coping with a 95 per cent plunge in bookings. Maybe in a few decades’ time there will be a Pixar movie in this, but for now it is just one more forlorn example of how Christmas commerce – and festive awe – has been unwound by a virus that, like Rudolph, will go down in history.

In numbers: Not now, robots

Jobs that could be displaced by “a shift in the division of labour between humans and machines” by 2025, according to the World Economic Forum’s (WEF) Future of Jobs Report 2020. For the avoidance of doubt, that’s 85 million human jobs.

Human “jobs of tomorrow” that will be created in this period, the WEF said. But it said that job creation was slowing, while “job destruction” accelerates.

Proportion of business executives who told the WEF’s survey that they were set to accelerate the automation of jobs in their companies, leaving workforces reeling from the “double disruption” of Covid-19 and technological adoption.

Getting to know: Darren Woods

Kansas-born Darren Woods is the chief executive of oil giant ExxonMobil and he would like you to know that he hasn’t spoken to Donald Trump lately, contrary to whatever fantasies the US president might have shared at Monday night’s rally in Arizona.

Although Woods has given money to Republican causes (though nothing in the $25 million range and nothing that goes directly to Trump’s re-election campaign), this donations-for-permits angle was deeply uncomfortable for ExxonMobil, which tweeted: “We are aware of the president’s statement regarding a hypothetical call with our CEO… and just so we’re all clear, it never happened.”

Not every product category is having a swell time in a 2020 defined by lockdown misery, but recent earnings updates from various consumer goods giants show that some brands continue to fly off the shelves no sooner than they hit them.

1. Purina. The Nestlé pet food brand is having a whale of a time as the pandemic brings an increase in pet ownership – a pet being a close contact, but not the kind you have to tell your government about.

2. Charmin. The Procter & Gamble brand is one of several in the toilet paper space to see sales grow this year, not just because of panic-buying spikes, but because people suddenly working at home all day don’t tend to put up with the rough stuff they find in workplace settings.

4. Airwick. Reckitt & Benckiser’s air freshener is also benefitting from the fact we’re trying to make our home environments as pleasant as possible these days.

5. Finish. Likewise, Reckitt & Benckiser’s dishwasher tablet is having a good pandemic. Yes, it is time to put it on again.